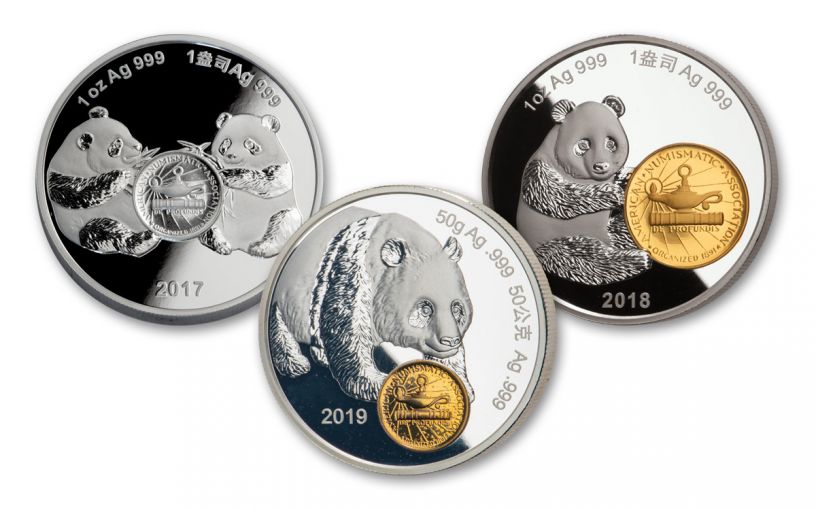 Availability: Out of Stock
This item is currently Out of Stock. Please sign up to be notified if this product becomes available.
Item #
353057
Add to Wish List Add to Wish List Wishlist is for registered customers. Please login or create an account to continue. Add to Compare

Three Years of ANA Show Pandas in One Incredible Set!

These wonderful proofs are official licensed products that were struck in Shanghai, China specifically for release at the American Numismatic Association’s (ANA) 2017, 2018 and 2019 World’s Fair of Money Shows held in Denver, Philadelphia and Chicago, respectively. Advertised as “the biggest, most educational coin show in the country,” the ANA Show brings together thousands of collectors to see the latest releases and share a love of collecting. And with each new event comes a new Show Panda commemorative struck in China with extremely limited mintages.

Each 99.9% fine silver coin’s design incorporates the official ANA seal. If you missed any of the last three ANA Show Panda Proofs, this is your chance to secure all three:

Each Panda comes in gorgeous Proof condition, meaning they were expertly crafted by the mint from hand-selected planchets, polished dies and multiple strikes to produce beautifully frosted details rising over mirror-like fields. ANA Show Pandas are highly sought-after collectives that tend to sell out quickly. Don’t miss your shot at acquiring not one, not two, but THREE of these coveted ANA Show Panadas with the 2017–2019 China Silver ANA Show Panda Three-Piece Proof Set!