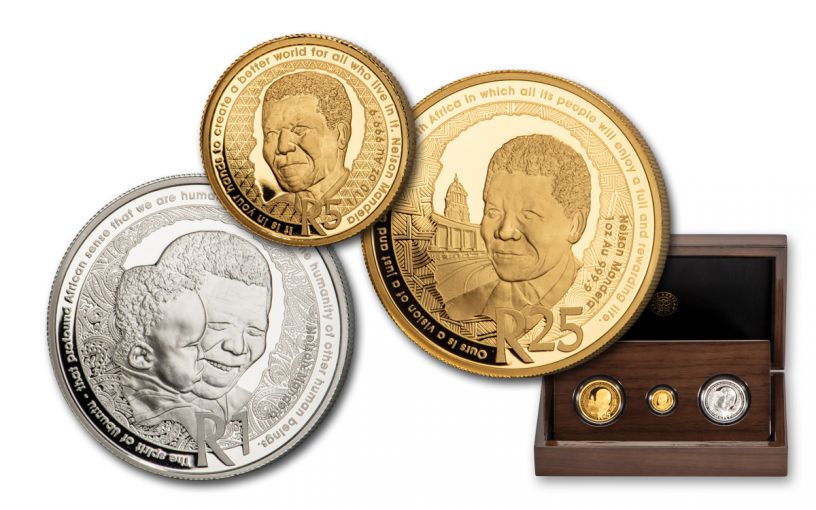 Availability: In Stock
This item will ship within 2 business days.
Item #
355915
CC Payments as low as
$1,248.75 / month
Add to Wish List Add to Wish List Wishlist is for registered customers. Please login or create an account to continue. Add to Compare

2019 marks the final year of the South African Mint’s famous Protea Series entitled “The Life and Legend of Nelson Mandela.” Since its debut in 2013, the series has featured designs inspired by a different chapter in the life of Mandela, a revolutionary, philanthropist and former President of South Africa.

This set contains three legal-tender coins struck for the last-year-of-issue 2019 release. Each was struck in gorgeous Proof condition and features a common obverse that depicts Nelson Mandela surrounded by a wreath of King Protea, a flowering plant native to South Africa. Each coin in this set features a distinctive and uplifting design:

Nelson Mandela (1918-2013) was a social rights activist, politician and philanthropist who became South Africa’s first black president from 1994 to 1999. He was arrested in 1962 for his work to end apartheid in South Africa and spent the next 27 years of his life in prison. In 1993, he was awarded the Nobel Peace Prize for his efforts to dismantle the country’s apartheid system. Today, Mandela is a symbol of inspiration for civil rights advocates throughout the world.

Just 800 of these 2019 South Africa Gold & Silver Protea Nelson Mandela Three-Piece Proof Sets were ever released by the South African Mint and each set comes displayed in its original mint packaging and accompanied by a Certificate of Authenticity. Don’t miss the final year of this inspiring series!