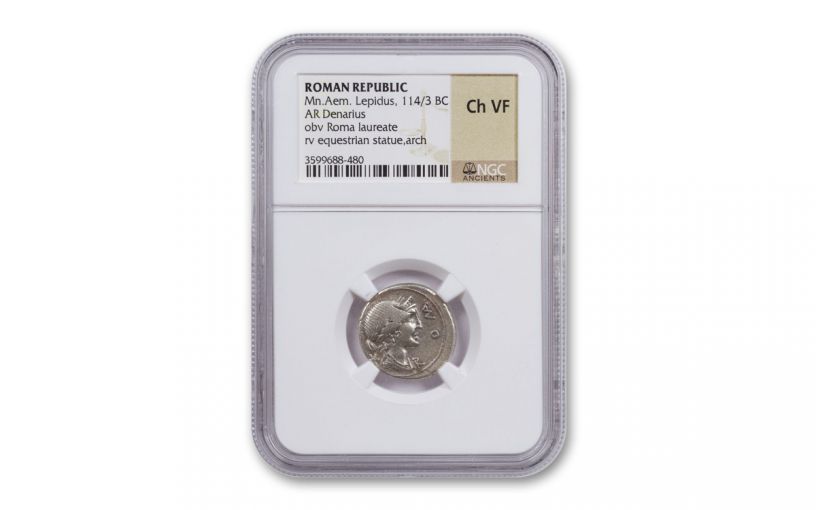 Availability: In Stock
This item will ship within 2 business days.
Item #
346345
Review this product
CC Payments as low as
$114.50 / month
Add to Wish List Add to Wish List Wishlist is for registered customers. Please login or create an account to continue. Add to Compare
Complete your collection with one of these:
Product Description

The Silver Denarius of ancient Rome was much like our dime today. The smallest unit of currency then in circulation was the aes or as, a small bronze coin that featured the bust of Janus and the prow of a galley on the reverse. A Denarius was originally equal to 10 asses. Even the name Denarius means “containing ten.” These coins played a key role in everyday commerce throughout the Republic. In fact, according to historians, a Silver Denarius would likely have been a day’s wage for an unskilled laborer. These coins first appeared in the 3rd century BC and would continue to be struck for the next 400 years

Recently we came into possession of a large hoard of these ancient coins struck from the 3rd to the 1st Centuries BC. What makes this hoard so remarkable is the condition – each has been certified and graded by the Numismatic Guaranty Corporation (NGC) as being in nice Choice Very Fine (Ch VF) condition. That’s a high grade for an ancient coin, with only moderate wear on the higher surface features and lettering and images with impressive detail.

In this offer, we’re giving you the opportunity to purchase an ancient Roman Republic Silver Denarius coins based on the coin’s grading and not the year or design. This random date option is an exciting way to add the most widely circulated coin of ancient Rome to your collection. Each will come sonically sealed in an acrylic holder with a white display core – giving you the best in protection while granting clear sightlines into every beautiful detail.

The coins in this offer feature a variety of designs. Some designs were very prominent, such as that of a Roman quadriga chariot on the reverse and Roma wearing a winged helm on the obverse. Many of the designs were chosen at the whim of the coin’s maker – a moneyer. Whatever the design, this silver coin would have paid a legionary soldier for about three days and bought enough wheat to bake his daily bread for nearly a month.