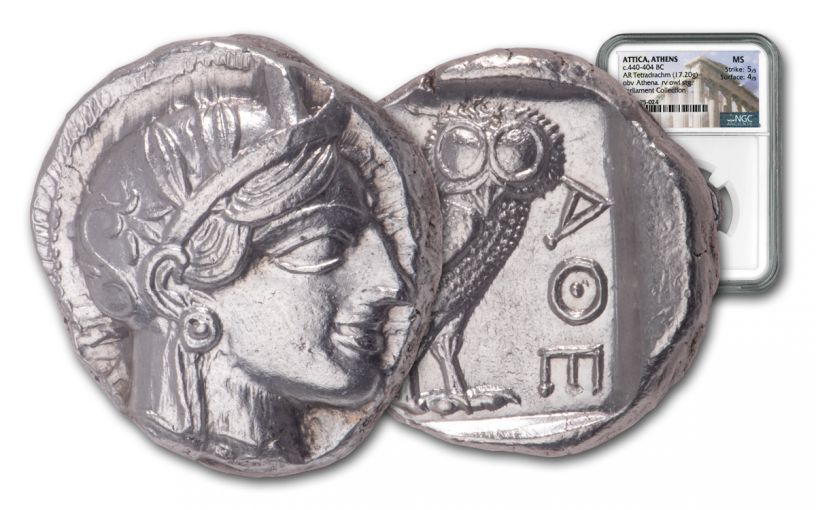 Availability: Call-In Only
This item is only available on a Call-In basis. Please call 1-800-510-6468 to speak to a representative.
Item #
342636
Add to Wish List Add to Wish List Wishlist is for registered customers. Please login or create an account to continue. Add to Compare

Struck sometime between 440 and 404 B.C., this Greek Silver Tetradrachm was minted in Athens, the capital city of Attica, a region of the Greek empire. It features perhaps the most iconic and instantly recognizable designs found on ancient coinage: the Athenian Owl, flanked by the crescent moon, olive branch, and monogram of its city of origin. The obverse features the goddess Athena herself, protected by her beautifully designed helmet.

Part of what makes these coins so iconic is that they are the first mass-circulated coin ever produced! In fact, many of the skilled laborers and soldiers who were paid with these coins simply had no idea what a coin was, resulting in many coins being marked with knives or other instruments used to cut into their surface and confirm their contents.

These coins were minted in large quantities in order to restore the Acropolis and build the Parthenon in Athens. Because of our connections in the numismatic world, we were able to get our pick of the nicest looking coins from this hoard. These selected pieces make up the Parliament Collection – a once-in-a-lifetime opportunity to acquire such high-quality Athena Owl coins.

It’s the largest hoard of its kind we’ve ever seen, with coins in this offering graded by the Numismatic Guaranty Corporation (NGC) as being in Mint State (MS) condition. These coins have received the extra designation of being a part of The Parliament Collection. Don’t let these historic, museum-quality coins disappear!

We only have a small cache of these coins, so you’d be wise to order your Athenian Owl Tetradrachm now while we still have some available!