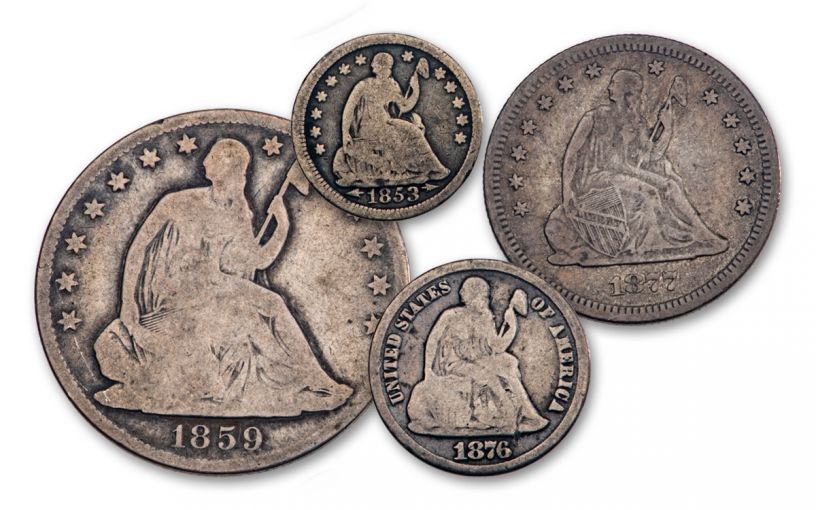 Availability: In Stock
This item will ship within 2 business days.
Item #
355338
CC Payments as low as
$124.50 / month
Add to Wish List Add to Wish List Wishlist is for registered customers. Please login or create an account to continue. Add to Compare

Here’s a beautiful set that pays tribute to one of our nation’s most famous coin designers and the four mints that struck his coins. It’s a four-piece set of Seated Liberty coins all featuring the famous design created by Christian Gobrecht, who, from 1840-1844, was the U.S. Mint’s Third Chief Engraver. During the time he served as the Mint’s “Second” engraver from 1835-1840, Gobrecht created the Seated Liberty design, which would appear on every U.S. coin denomination from the half dime to the silver dollar.

In this set you’ll get the Half Dime, Dime, Quarter and Half Dollar each struck in 90% fine silver between 1837 and 1891. Each set will also come with one coin from four different mints – Philadelphia (no mark), New Orleans (O), Carson City (CC) and San Francisco (S). The individual coins will come housed in numismatic capsules and the entire set will come beautifully housed in a deluxe presentation case and accompanied by a Certificate of Authenticity. Each coin also comes in Good (G) condition and dates will vary.

These coins continued to be struck long after Gobrecht had passed away, leaving a legacy as one of the most renowned engravers in American history. Among his fans were Augustus Saint-Gaudens, which was certainly a big feather in Gobrecht’s posthumous hat. For most Americans, however, the legacy of Gobrecht is that his coins were the currency that lined their pockets and served them well more than 100 years ago.

Now these coins can be yours. Just imagine whose pockets they jingled in and what they were used to purchase all those decades ago as they spread across a United States as it fulfilled its manifest destiny. Click the 1837–1891 Seated Liberty Four-Piece Mint Mark Set to your cart today!