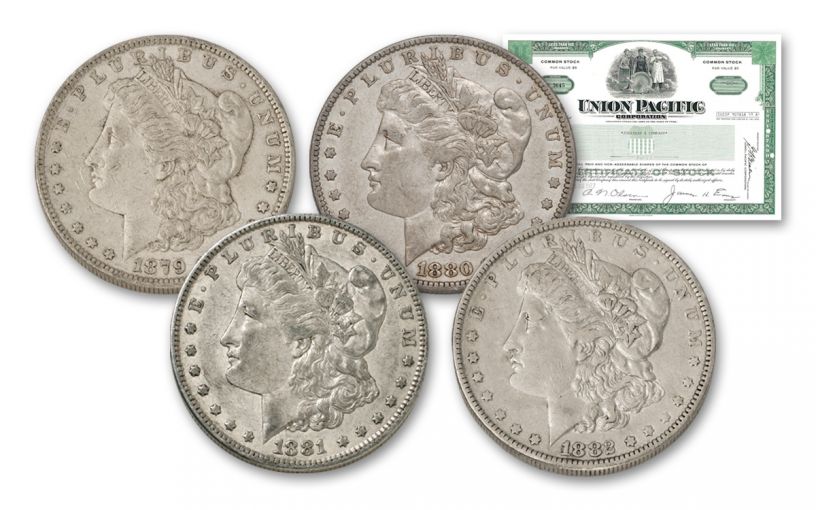 Availability: In Stock
This item will ship within 2 business days.
Item #
362799
CC Payments as low as
$149.50 / month
Add to Wish List Add to Wish List Wishlist is for registered customers. Please login or create an account to continue. Add to Compare

The New Orleans Mint is famous for having been the only United States Mint Branch to have served under three governing bodies: the United States of America, the State of Louisiana and the Confederate States of America. This set of four Morgan Silver Dollars represents the first four dates struck with the famous “O” mint mark: 1879-O, 1880-O, 1881-O and 1882-O. “Firsts” are always coveted by collectors, and here you have more than just the first year —you have the first FOUR!

Morgan Silver Dollars are among the most popular and heavily collected coins of all time! Sadly, of the millions struck from 1878-1921, only a fraction remains today for collectors. In fact, it is estimated that only 15% of ALL Morgans struck exist today. Each coin in this 1879–1882-O Morgan Silver Dollar Four-Piece Set comes in lightly circulated Extremely Fine (XF) condition with lots of nice detail. Plus, you’ll also receive a colorful, authentic Union Pacific stock certificate from a railroad that has long served the New Orleans area. With passenger train travel during the 1880s costing about two or three cents per mile, these four Morgans could have paid for a trip more than 100 miles away.

Here's your chance to punch your ticket for the first four Morgan Silver Dollars struck by the New Orleans Mint. Add this set to your collection today and enjoy the ride!

The total amount of Morgan Silver Dollars has seen significant evaporation into both collections and the melting pots. Once our supply of these 1879-1882 O-Mint Morgans disappears, it might be gone for good. Don’t wait any longer to secure yours now!