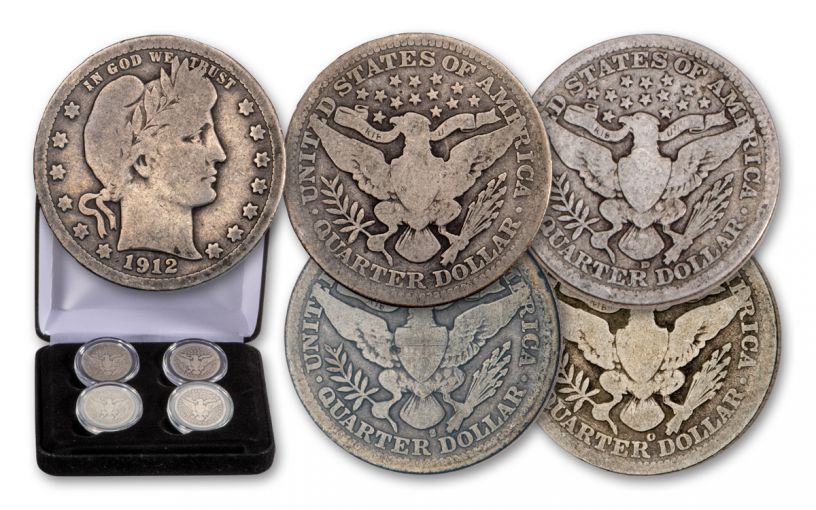 Availability: In Stock
This item will ship within 2 business days.
Item #
362926
Add to Wish List Add to Wish List Wishlist is for registered customers. Please login or create an account to continue. Add to Compare

More than 100 years ago, the Barber Quarter lined the pockets of Americans. Struck from 1892 to 1916, it displays Liberty in profile on the obverse and a proud eagle on the reverse. During the course of its existence, the Barber Quarter was struck at four different mints: Philadelphia, New Orleans, Denver and San Francisco. Finding coins from each mint can be tough today, as 60% of them were struck in Philadelphia while the others struck just 13%, 19% and 8%, respectively. Add onto that the number of coins that have worn down in commerce or were melted for their 90% fine silver content, and you can really begin to understand why finding a coin from each mint is an even more daunting task.

That’s why we feel fortunate to have been able to put together this set that brings together a single coin from each mint. Plus, each coin comes in Circulated condition, meaning they were used in commerce up to and during the Turn of the Century and on through World War I. The entire set will come beautifully housed in a clamshell display box. Dates vary.

Get a complete mint mark set of one of America’s most historic coin series with this 1892–1916 Barber Silver Quarter Four-Piece Mint Mark Set. Don’t delay, order yours now!