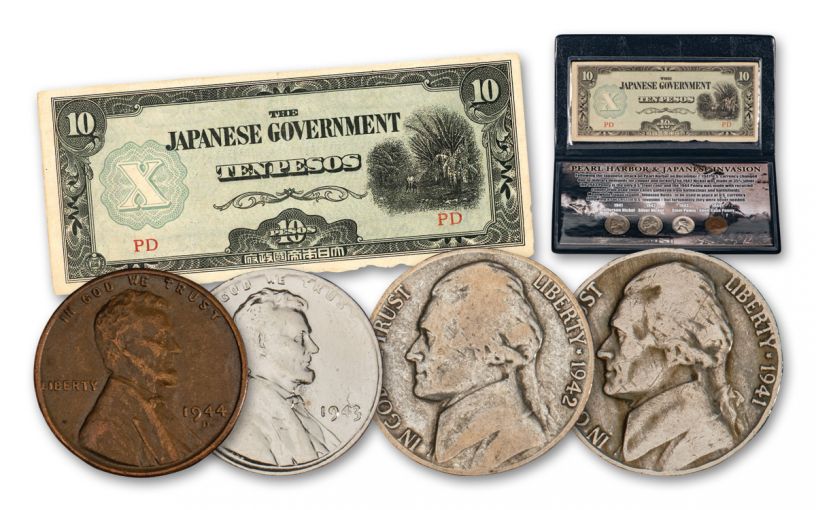 Availability: Available for Order
This item will ship 08/24/21
Item #
351283
Add to Wish List Add to Wish List Wishlist is for registered customers. Please login or create an account to continue. Add to Compare

On December 7, 1941, America was going about its business like any other Sunday in the weeks leading up to Christmas. The Washington Redskins football team was in the process of defeating the Philadelphia Eagles 20-14 at Griffith Stadium in Washington, D.C. in both team’s final NFL game of the season. Across town, President Franklin D. Roosevelt was in his study at the White House working on his stamp collection. At about 1:47 p.m. Eastern time the President received a call informing him that the Japanese has just attacked the United States Naval Base at Pearl Harbor in Hawaii, a surprise attack that forced the United States to enter World War II.

This collection brings together a number of pieces from that era: a 1941 Jefferson Nickel struck the year of the attack; a 1942 Jefferson Nickel struck in 35% silver to save nickel for the war effort; a 1943 Lincoln Cent struck in Steel instead of copper, again to provide much-needed supplies to our troops; and the 1944 Lincoln Cent, made using copper from recycled shell casings recovered from battlefields and ships. The final item is either a 5- or 1-Peso Japanese Invasion Note (note our choice) that the Japanese flooded the Philippines with and planned to use in the United States in the event of a successful invasion — a fantastic piece of World War II history for your collection.