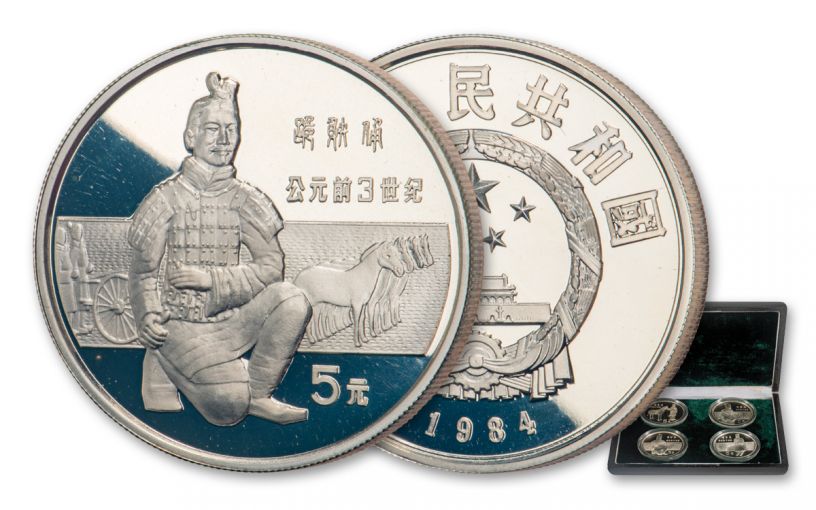 Availability: Out of Stock
This item is currently Out of Stock. Please sign up to be notified if this product becomes available.
Item #
344708
Add to Wish List Add to Wish List Wishlist is for registered customers. Please login or create an account to continue. Add to Compare

Among the most famous – and mysterious – relics of ancient China is an army of terracotta warriors discovered in 1974 by a group of farmers digging a well in central China. The vast army includes thousands of soldiers, chariots and horses – all depicting the army of Qin Shi Huang, the first emperor of China and buried with him to protect him in the afterlife.

Those faithful warriors were given new life by the China Mint in 1984 when they were used as the theme for China’s first Historical Figures set. Each coin in the fabulous four-piece set was struck in 90% fine silver and features its own unique, one-year-only design. The designs for this first-ever set includes one soldier facing left, another facing right, a third solder kneeling and finally a soldier with his horse. Each 5 Yuan legal-tender coin measures 36 mm in diameter to showcase the frosted details rising over mirror-like fields.

China’s famous collection of terracotta soldiers is a fascinating testament to the power and glory of ancient Chinese emperors. Buried with Qin Shi Huang around 210-209 BC, each sculpture has its own face and expression. Each also varies in height according to rank with generals being the tallest. The 8,000-strong army is so detailed that it even includes non-military figures of government officials, acrobats and musicians. The massive site – the entire necropolis is nearly 40 square miles in size!  – has since been named as a UNESCO World Heritage Site and is still studied by scientists who have yet to unravel all the secrets of the emperor’s tomb.

There’s no secret about this set – just 19,301 were ever struck and this is the first time we have ever been able to offer them to our customers. Also known as the “Founder of Chinese Culture” series, these sets are very popular and hard to find. Each set comes in its original government packaging consisting of a beautiful presentation case and a certificate of authenticity. Don’t delay, click one to your cart today!

Hurry! To amass an army of silver with the 1984 China Historical Figures Four-Piece Silver Proof Set, you’ll have to act fact because few of these sets are still available after the initial release 35 years ago!