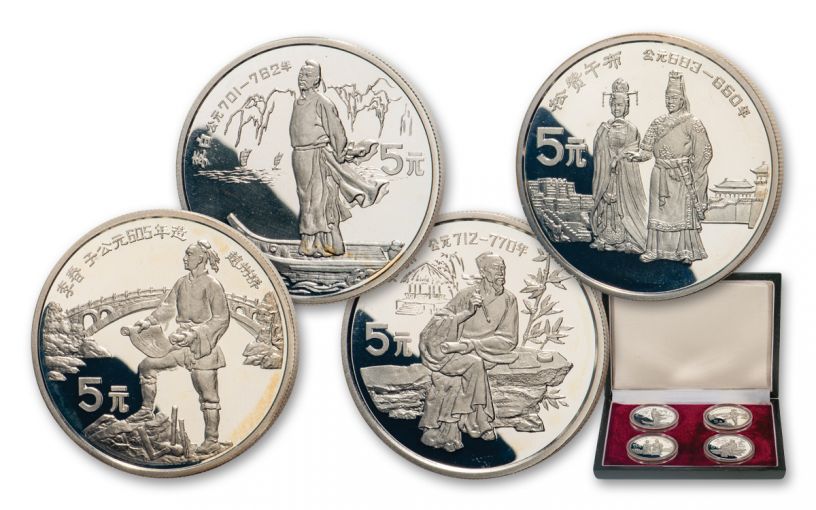 Availability: Call-In Only
This item is only available on a Call-In basis. Please call 1-800-510-6468 to speak to a representative.
Item #
344707
Add to Wish List Add to Wish List Wishlist is for registered customers. Please login or create an account to continue. Add to Compare

China’s fabulous Tang Dynasty was a medieval monarchy that reigned for nearly 300 years. Widely regarded by historians as the high point of Chinese civilization, its culture and cosmopolitan court set a high standard that was unsurpassed, leading future generations to refer to it as China’s Golden Age.

That halcyon era saw new life in 1987 thanks to the China Mint when it was used as the theme for China’s fourth Historical Figures set. Each coin in the fabulous four-piece set was struck in 90% fine silver and features its own unique, one-year-only design. The designs feature the poets Li Bai and Du Fu on their own coins, Emperor Li Chun (Xianzong) is depicted on a third coin, and Princess Chen Wen and her husband, Song Zan Gan Bu, founder of the Tibetan Empire, appear on the fourth coin. Chen Wen is credited for introducing Chinese culture to Tibet. Each 5 Yuan legal-tender coin measures 36 mm in diameter to showcase the frosted details rising over mirror-like fields.

China’s legendary Tang Dynasty from 618 to 907 was an age of reform and cultural advancement. The forward-thinking monarchs and their ministers laid the groundwork for many policies that are still observed in China today! Things like gunpowder, air conditioning, gas stoves, printing, and advancements in medicine, science, technology, architecture and literature all originated from the Tang Dynasty. Additionally, as the dynasty’s power grew and expanded, the practice of Buddhism spread with it across much of Asia.

Just 9,650 of these magnificent sets were ever struck and this is the first time we have ever been able to offer them to our customers. Also known as the “Founder of Chinese Culture” series, these sets are very popular and hard to find. Each set comes in its original government packaging consisting of a beautiful presentation case and a certificate of authenticity. Don’t delay, click one to your cart today!

Hurry! To collect the interesting personalities of China’s influential Tang Dynasty in the 1987 China Historical Figures Four-Piece Silver Proof Set, you’ll have to act fact because few of these sets are still available after the initial more than 30 years ago!