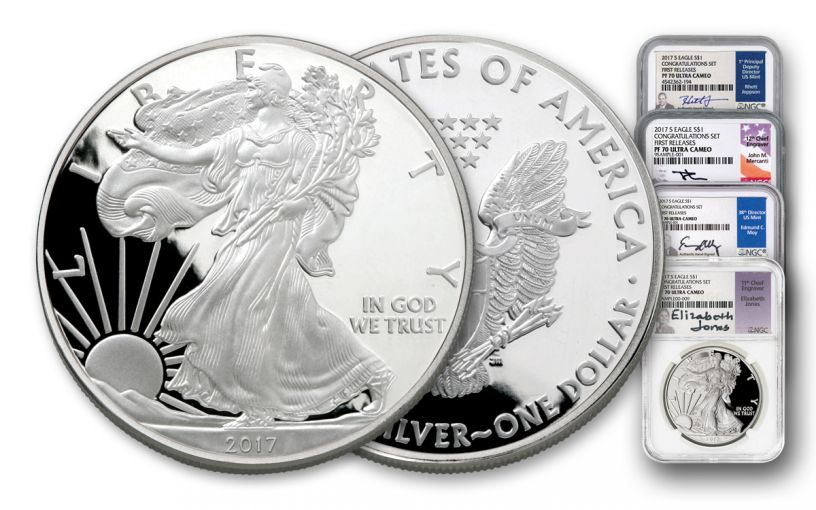 Availability: Call-In Only
This item is only available on a Call-In basis. Please call 1-800-510-6468 to speak to a representative.
Item #
309588
Add to Wish List Add to Wish List Wishlist is for registered customers. Please login or create an account to continue. Add to Compare

If you haven’t secured a 2017-S Silver Eagle Proof for your collection, you’d better hurry! Sold out at the mint in 120 seconds, this coin originally was released solely as part of a special “Congratulations” set with a mintage of just 75,000. Thankfully, a few still remain, but even our selection is sure to run out soon.

But what a selection it is! Here you’ll find a four-coin set of 2017 Silver Eagle Proofs struck at the San Francisco Mint, each with a label bearing a different signature from a major figure in America’s coin industry. The four signatures include:

In addition, all four coins have been graded by the Numismatic Guaranty Corporation (NGC) as being in flawless Proof-70 Ultra Cameo (PF70 UC) condition, a distinction that means your perfectly-graded proofs will have ZERO imperfections – showing all features and fields exactly as the engraver and mint intended. NGC has further certified that your proofs are First Releases (FR) coins, a designation that means your Silver Eagles were received by NGC or an NGC-approved depository within the first 30 days of their release. Collectors seek out coins with this certification because they are produced with new dies and considered to have sharper strikes and deeper mirrors than those that are struck later.

You’ll be stunned by how dazzling these coins look when you hold them in the palm of your hand – but only if you reserve this set now. This is your chance to secure an immaculate set 2017 Silver Eagle for your very own. Don’t wait – order yours today!

Silver Eagles like these are perennial favorites, usually flying out of our vaults as soon as they arrive! Whether you're new to the series, a diehard collector or a silver stacker looking to add to your reserve, this is your chance to secure the 2017-S Silver Eagle Mercanti, Jones, Moy & Jeppson Signed Label Four-Piece Proof Set for your very own. Don't wait – order yours today!