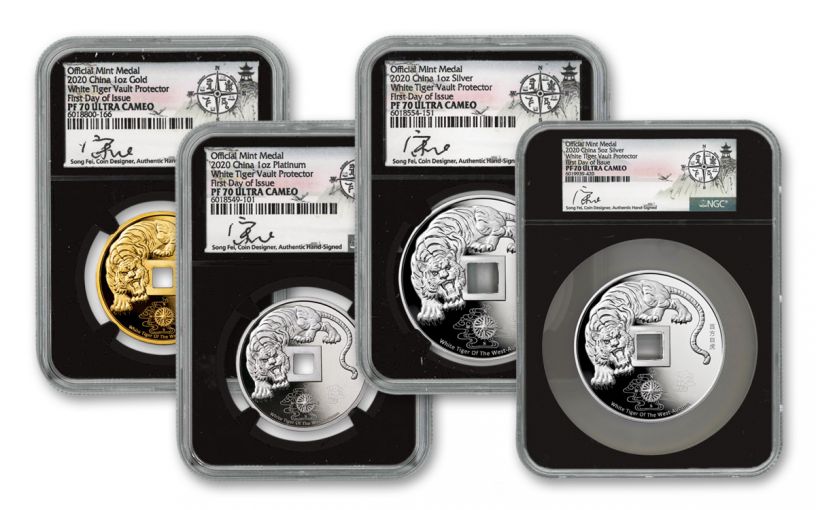 Availability: Call-In Only
This item is only available on a Call-In basis. Please call 1-800-510-6468 to speak to a representative.
Item #
364406
Add to Wish List Add to Wish List Wishlist is for registered customers. Please login or create an account to continue. Add to Compare

The first release in the series depicts the White Tiger (Baihu) of the West, the representation of Autumn. A symbol of force and the military, it’s no surprise that this holy beast’s element is metal. In this four-piece set you can acquire the one-ounce and five-ounce pieces struck in 99.9% silver, the one-ounce gold piece struck in 99.9% gold and the one-ounce platinum piece struck in 99.9% platinum. These 2020-dated medals also pay tribute to China’s Vault Protector coins — classic “cash” coins that were round with square holes in the center. They were hung with silk in both personal and government vaults as a way to protect wealth against disaster and to ensure the favor of the gods. These pieces depict the White Tiger as it stalks around the center square. The common obverse features a section of the Great Wall of China.

Just 1,888 one-ounce silver proofs, 500 five-ounce silver proofs, 200 one-ounce gold proofs and 200 one-ounce platinum proofs will be minted — and only a limited number of flawless FDI proofs are available sealed with hand-signed labels. As the first release in a series in what’s sure to be a popular series, we expect these proofs to fly out of here. The other three releases in the series, Azure Dragon, Vermillion Bird, and Black Tortoise are set to be released in 2020 & 2021. Don’t miss out; get the first release in the series now while you still can!