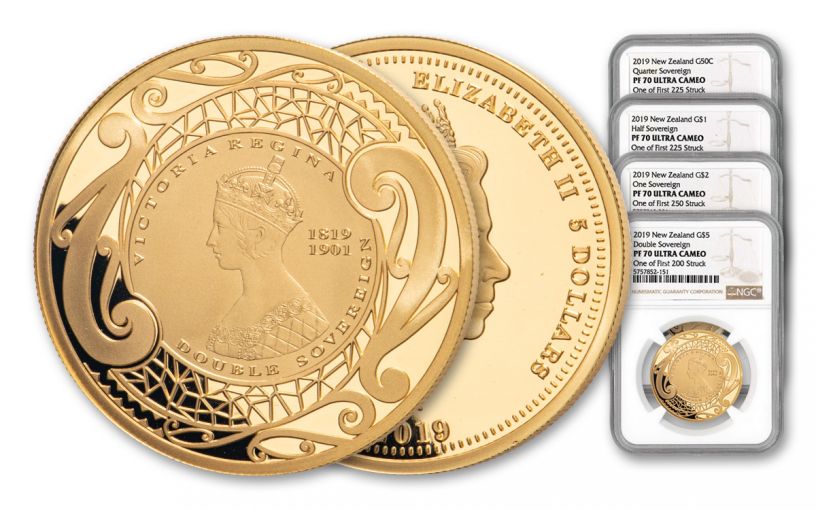 Availability: Call-In Only
This item is only available on a Call-In basis. Please call 1-800-510-6468 to speak to a representative.
Item #
352711
Add to Wish List Add to Wish List Wishlist is for registered customers. Please login or create an account to continue. Add to Compare

The British Gold Sovereign is one of the most widely recognized coins in the world, first struck more than 200 years ago. In its long and celebrated history, the Sovereign has been struck in Great Britain, Australia, South Africa, India and Canada. Now, on the 200th anniversary of Queen Victoria’s birth, the world’s first-ever New Zealand Gold Sovereigns are being issued! And, as if to make up for lost time, New Zealand isn’t releasing just one Gold Sovereign, it’s releasing FOUR – and this is your chance to get the complete set of this highly anticipated release!

Each coin bears a different reverse design of Queen Victoria at a different stage of her life, along with dual dates showing her years of birth and death. These designs come courtesy of celebrated designer Natanya van Niekerk, the creative genius who won numerous international coin awards for her work on the South African Mint’s acclaimed Natura series. The obverse displays Queen Elizabeth II as well as dual denominations for each coin. This impressive four-coin set includes the $5 Double Sovereign, $2 Sovereign, $1 Half Sovereign and 50-Cent Quarter Sovereign, struck in 16 grams, 8 grams, 4 grams and 2 grams of 91.67% (22 karat) gold, respectively. Each coin is official New Zealand legal tender.

Each coin in your 2019 New Zealand Gold Sovereign Four-Piece Set has been graded by the Numismatic Guaranty Corporation (NGC) as being in flawless Proof-70 Ultra Cameo (PF70UC) condition, a distinction that means your perfectly-graded proofs will have ZERO imperfections – showing all features and fields exactly as the engraver and mint intended. In addition, NGC has also certified that each proof as being a First Struck (FS) coin, a designation that means your coins were all received by NGC or an NGC-approved depository within the first 30 days of their release! They will come sonically sealed in acrylic holders with white display cores and special labels that state they are “One of the First Struck.”

We’ve been able to assemble just 140 of these special sets and they will go fast. Don’t delay; order your set now before they’re snapped up by other eager collectors!