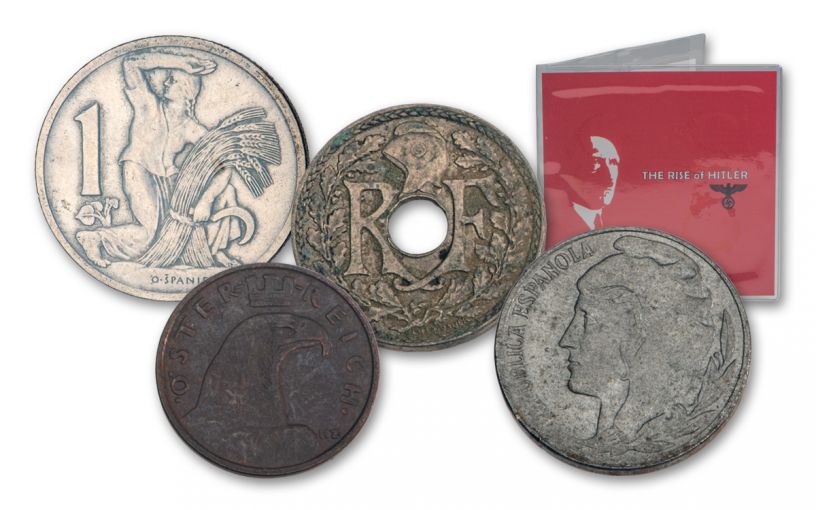 Availability: In Stock
This item will ship within 2 business days.
Item #
354161
Add to Wish List Add to Wish List Wishlist is for registered customers. Please login or create an account to continue. Add to Compare

Coins that Witnessed the Rise of Hitler

While the formal start of World War II was in 1939, Adolf Hitler and his Nazi Party were amassing power long before the invasion of Poland. In 1936, his forces violated the terms of the Treaty of Versailles by reoccuping the Rhineland, a key industrial center that had been demilitarized after World War I. In 1937, the Nazis aided Spain’s fascist dictator Generalísimo Francisco Franco by bombing his Basque enemies in northern Spain. In 1938 and 1939, Germany annexed territories in Austria and Czechoslovakia, creating the Protectorate of Bohemia & Moravia.

Hitler’s rise to power and rapid escalation of European tensions in the late 1930s set the stage for the coming horrors of World War II. For the people living in those times, daily life continued – even if it was under the imminent threat of war. That meant shopping and paying for goods and services. This four-coin set includes the money those people would have needed to get by – a four-piece set of coins dated between 1936 and 1939, issued in countries taken over by the Nazis during the early years of the Third Reich.

Each set comes beautifully displayed in a mini album and accompanied by a certificate of authenticity that will help you track the history of these coins during Hitler’s rise to power. An impressive set for any World War II or history buff, click one to your cart today!