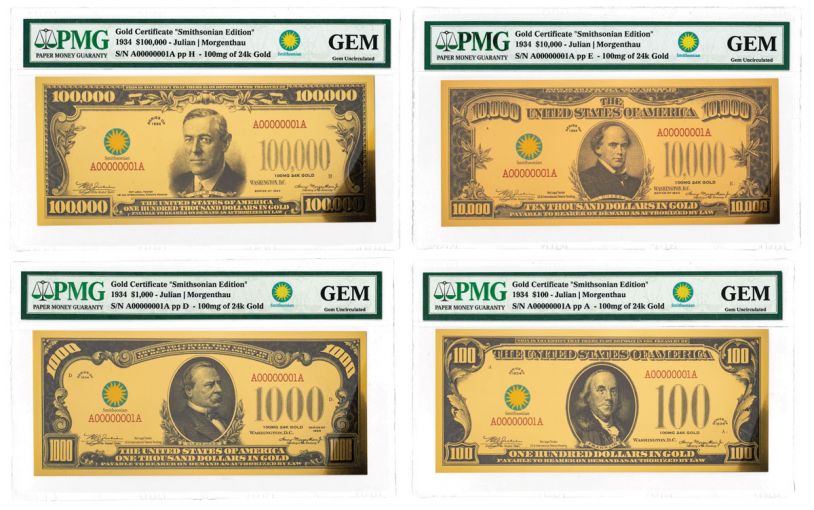 Availability: In Stock
This item will ship within 2 business days.
Item #
357812
Add to Wish List Add to Wish List Wishlist is for registered customers. Please login or create an account to continue. Add to Compare
Recommended Products
Product Description

The Series 1934 Gold Certificates were legal tender, but never intended for circulation. Instead, they were used to transfer funds between Federal Reserve banks, and once they were retired in the 1960s, most were destroyed. However, you can still see them in person at the Smithsonian® National Museum of American History.

Now, the Smithsonian® has resurrected these famous notes by authorizing a limited striking of the designs in 100mg of 99.9% (24 karat) gold! They feature the same designs as the originals:

The 1934 $100 24-Karat Gold Certificate features the familiar portrait of Benjamin Franklin, who signed both the Declaration of Independence and the Constitution – historic documents that established the United States of America.

The 1934 $1,000 24-Karat Gold Certificate shows a portrait of President Grover Cleveland, the only U.S. President to serve two non-consecutive terms. He was elected in 1884 & 1892 and won the popular vote but lost the electoral vote in 1888.

The 1934 $10,000 24-Karat Gold Certificate depicts Salmon P. Chase, who as Abraham Lincoln’s Secretary of the Treasury during the Civil War, was instrumental in establishing the national banking system and issuing paper currency.

The 1934 $100,000 24-Karat Gold Certificate features President Woodrow Wilson, who led the country through World War I, Wilson was a major figure during the Versailles Peace Conference and helped create the League of Nations.

Each gold certificate comes certified by Paper Money Guaranty (PMG) as being in Gem condition.

If you're a fan of American history, large bills, new technology or all of the above, this set of 24-karat gold currency strikes is definitely one to own! Just don't wait too long – certificates made with this new technology have already become massive hits with collectors. Ring one up this four-piece set to your cart today!