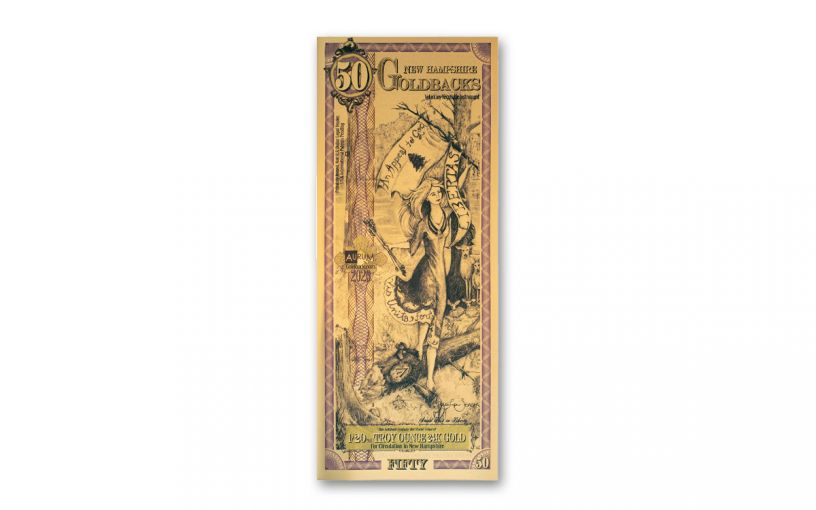 Availability: In Stock
This item will ship within 2 business days.
Item #
409459

There’s a voluntary unit of local currency that exists in New Hampshire called “Goldbacks,” 24-karat gold foil notes that are crafted in increments of 1/1000th of an ounce of highly pure 99.9% fine gold. Already, many local merchants and vendors are accepting this new form if currency as payment. What’s more, they can be accepted in other states that allow the usage of these intriguing and beautifully designed notes.

Each wafer-thin note is coated with a protective plastic cover so it can be circulated, exchanged and used without the gold tearing. They’re meant to be used just like cash to purchase items. If you travel through New Hampshire, you’ll probably even see signs that say “Goldbacks Accepted Here” to let you know these fractional gold units can be spent just like any other form of legal-tender currency. Anyone can own Goldbacks, even if they aren’t a resident of New Hampshire.

Not only is each Goldback crafted in increments of 1/1000th of an ounce of pure gold (1 Aurum), but they are also fabulous examples of the engraver’s art — and the larger the denomination, the bigger the note. The design on each denomination features an allegorical depiction of one of the lady virtues and combines her with distinct symbols representing different aspects of New Hampshire history and culture.

The 50 Aurum 1/20th-oz gold note offered here features the allegorical figure of Lady Libertas — Latin for Liberty. She is depicted as a tall slender blonde stepping over a downed tree holding a branch in one hand and arrows in the other. The arrows are symbolic of being ever ready for the fight. On the branch is a flag featuring a lone pine tree and the words, “An Appeal to God.” This flag was commonly used during the American Revolution by colonial militias and the Continental Army. Also attached to the branch is a banner that is inscribed with the word “LIBERTAS.” Sewn into the hem of her dress are words that read “Vis Unita Fortior” which translates to “Strength United is Stronger.” In the background to Liberty’s right a pair of white-tailed Deer peer out at her from behind a tree. White-tailed deer were designated as New Hampshire’s state animal in 1983. The back of the note displays the negative image of the front illustration, which also serves as a security feature.

Not just a novelty item, New Hampshire’s Goldback Notes are official legal tender. Plus, each bill can be melted down for its precious metal content if its owner would rather have a solid gold piece. It’s always good to have some gold in your portfolio, and now you can obtain pure gold that’s capable of buying basic items such as a loaf of bread, a gallon of milk, a dozen eggs… and more! Go for the gold today and have a ready stash for tomorrow!