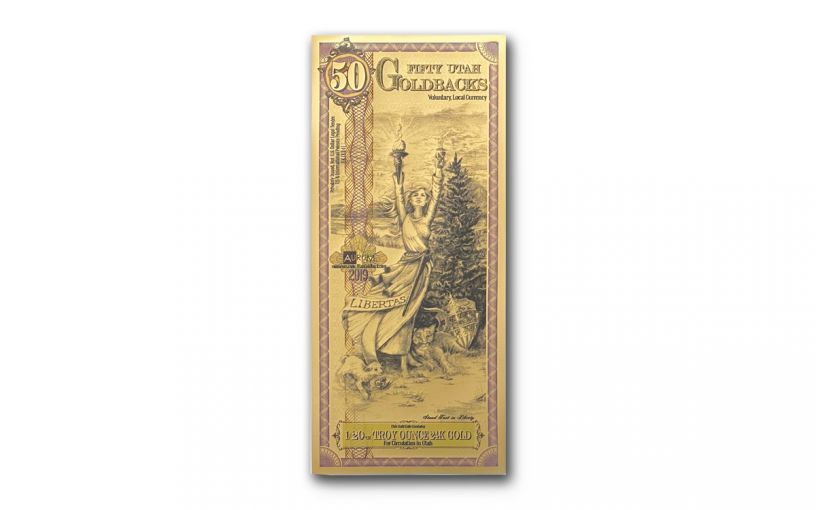 Availability: In Stock
This item will ship within 2 business days.
Item #
362264

Put Some Gold Back in Your Collection With the Utah Goldback

Did you know there’s a voluntary unit of local currency that exists only in Utah? It’s true! Thanks to the passage of the Utah Legal Tender Act in 2011, a large number of local merchants and vendors are willing to accept a new currency called “Goldback Notes” as payments.

Struck in 24-karat gold foil, these notes are crafted in increments of 1/1000th of an ounce of highly pure 99.9% fine gold. Each wafer-thin note is coated with a protective plastic cover so it can be circulated, exchanged and used without the gold tearing. They’re meant to be used just like cash to purchase items from merchants who are willing to accept them. If you travel through Utah, you’ll undoubtedly see signs that say “Goldbacks Accepted Here” to let you know these fractional gold units can be spent just like any other form of legal-tender currency. Anyone can own the Goldbacks, but they’re legal tender only in Utah.

Not only is each Goldback crafted in increments of 1/1000th of an ounce of pure gold (1 Aurum), but they are also fabulous examples of the engraver’s art—and the larger the denomination, the bigger the note. The design on each denomination features an allegorical depiction of one of the lady virtues and combines her with a distinct period of time in Utah.

The 50 Aurum 1/20th-oz gold note offered here features Lady Liberty lifting both her hands to the sky while surrounded by several references to Utah’s history, including the Deseret Shield symbolic of the State of Deseret, a provisional state of the United States proposed in 1849 by Mormon settlers. Also shown is a mountain lion, an animal native to Utah that can be found from the state’s High Uinta wilderness to its dry southern deserts. In the background is Bear Lake, the second-largest natural freshwater lake in Utah. Rounding out the design is an innocent lamb huddled at the feet of Liberty. When a lamb is combined with a lion it creates a symbol of paradise, thus portraying Utah as a place of Heavenly bliss.

Not just a novelty item, Utah’s Goldback Notes are official legal tender. Plus, each bill can be melted down for its precious metal content if its owner would rather have a solid gold piece. It’s always good to have some gold in your portfolio, and now you can obtain pure gold that’s capable of buying basic items such as a loaf of bread, a gallon of milk, a dozen eggs… and more! Go for the gold today and have a ready stash for tomorrow!