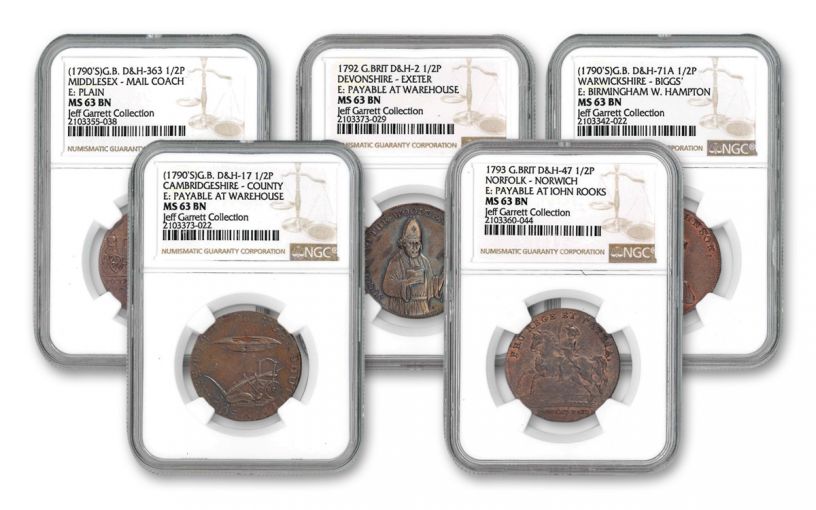 Availability: Call-In Only
This item is only available on a Call-In basis. Please call 1-800-510-6468 to speak to a representative.
Item #
364608
Add to Wish List Add to Wish List Wishlist is for registered customers. Please login or create an account to continue. Add to Compare
Recommended Products
Product Description

During the late 18th and early 19th centuries, the nations of England, Wales, Scotland and Ireland faced a shortage of small denomination coins. To help alleviate the shortage, private businesses began striking their own Provincial Tokens, mostly in copper. It’s estimated that more than 4,000 of these designs exist, making them highly collectible. The name “Conder Token” comes from James Conder, a British collector who created a list of many of these tokens in 1798.

This selection of Conder Tokens comes directly from Jeff Garrett, one of the world’s most famous numismatist and one of the top coin experts in the United States. He is regularly called upon by the nation’s largest coin dealers, publishers, museums and institutions for his expertise, and has nearly 50 years of experience buying, selling and examining coins. That includes more than 2,000 Conder Tokens he has added to his personal collection. These tokens were among those 2,000 personally acquired by Garrett.

In this offer, you’ll receive five Conder Tokens accompanied by a personalized letter hand signed by Garrett detailing his passion for these tokens, why he began collecting them and their importance to numismatics. More than just tokens that could later be exchanged for Regal coinage, these pieces also offer a rare glimpse into the lives of the people in the late 1700s. Many of the designs included advertisements, and promotions for political views and social problems — designs that we can still relate to now.