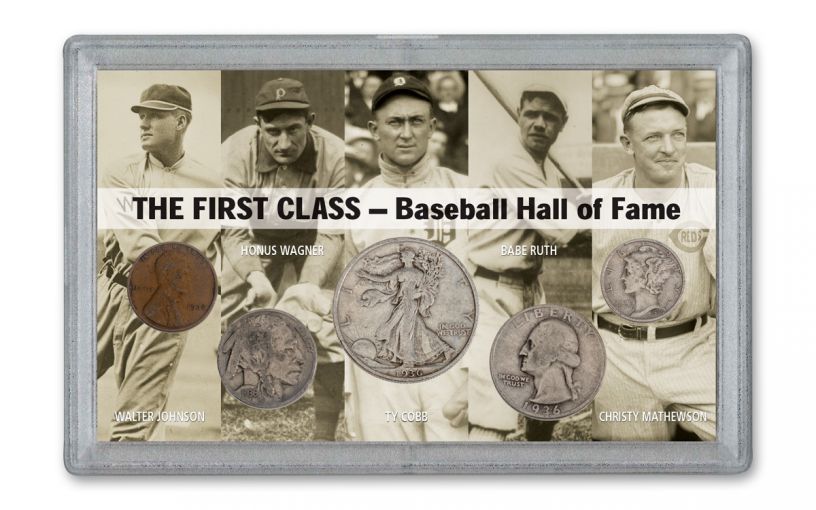 Availability: In Stock
This item will ship within 2 business days.
Item #
366102
Add to Wish List Add to Wish List Wishlist is for registered customers. Please login or create an account to continue. Add to Compare

First Induction of the Baseball Hall of Fame 5-Coin Set

Though the building itself would not be built until 1938 and not opened to the public until 1939, the Baseball Hall of Fame in Cooperstown, New York was established in 1936 as a way to celebrating the National Pastime of baseball. The first five inductees were Ty Cobb, Walter Johnson, Christy Mathewson, Honus Wagner and Babe Ruth.

This Great Depression-era five-piece set includes a Lincoln Cent, Buffalo Nickel, Mercury Dime, Washington Quarter and Walking Liberty Half Dollar — all circulating coins struck in 1936. These coins were the backbone of a recovering economy during a time when a gallon of gas cost 10 cents, a loaf of bread was 8 cents, a pound of ground beef cost 12 cents and four cans of Campbell’s® Tomato Soup sold for 25 cents. Each set comes in a custom card along with a replica of an actual newspaper chronicling Babe Ruth’s home run chase in 1927!