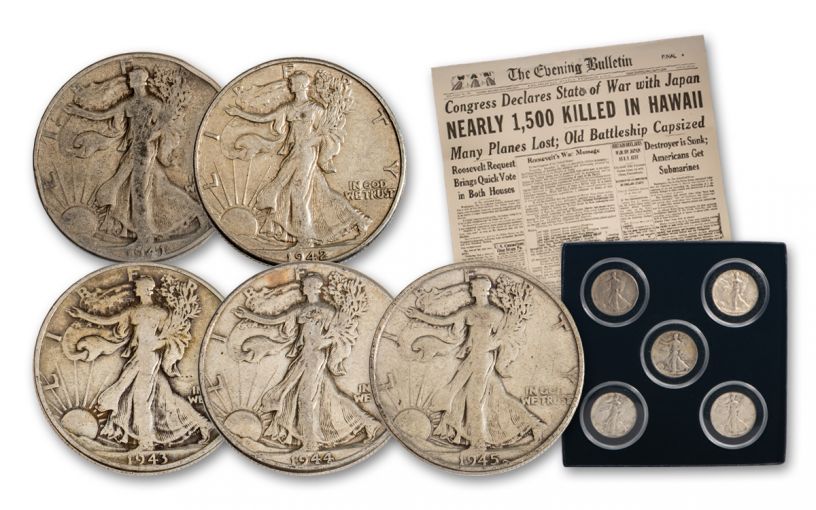 Today, we know the Walking Liberty design as the obverse of the American Eagle Silver Dollar. But when it was first struck the image was used for the Walking Liberty Silver Half Dollar, struck in 90% fine silver. This set of five Silver Half Dollars comes dated between 1941 and 1945, making them important pieces of U.S. World War II history. But following the anxious years of rationing and shortages during the 1940s, many war-era half dollars like these were melted for their precious silver or simply worn out in circulation. That means finding any quantity of these 1941-1945 Walking Liberty Half-Dollars today – nearly 75 years after they last rolled off the presses – can be a challenge.

Here’s the Good News: Not only did we find a cache of coins, but each coin comes in Fine to Very Fine (F–VF) condition, housed together in a presentation case for optimal viewing. In addition, you will receive a newspaper reprint from December 8, 1941 – the day after the Japanese attack on Pearl Harbor– as well as a 1944 French 2 Franc Allied Military Currency (AMC) note. This is the perfect gift for any military history or World War II buff! Reserve yours now!

It’s not often that we find a complete run of Walking Liberty Silver Half Dollars like this from the World War II era! While our small quantity lasts, you can own a set of these iconic coins for less than $20 each! Just don’t wait – they’re sure to go fast!