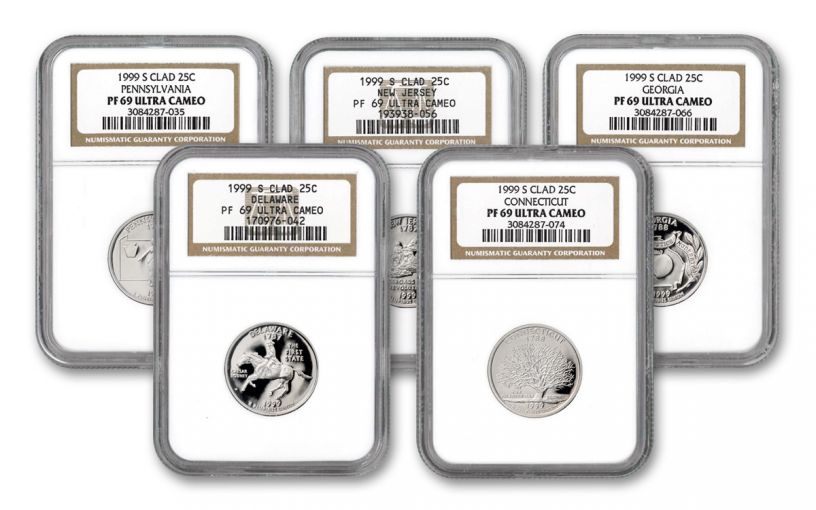 Availability: In Stock
This item will ship within 2 business days.
Item #
360213
Add to Wish List Add to Wish List Wishlist is for registered customers. Please login or create an account to continue. Add to Compare

There’s no question about it; the U.S. Mint’s 50 State Quarters Program that ran from 1999 to 2008 was so popular that it created an entirely new generation of collectors. These coins were released by the mint every 10 weeks in the same order that the states ratified the constitution or were admitted to the Union, with each featuring a unique design based on the state’s history, traditions and symbols. Each was produced for only 10 weeks and never produced again. The first modern circulating coin program with a new design on each coin, the 50 State Quarters Program became the most successful numismatic program in U.S. history with roughly half of the nation’s population collecting the coins in some way.

This set of five State Quarters Proofs were the first designs of the series. Minted in Proof condition at the San Francisco Mint, these coins were never meant for circulation — instead, their frosty designs and mirrored fields were sealed by the Numismatic Guaranty Corporation (NGC) in protective capsules to preserve their beauty for generations. You can secure this first-year set featuring designs dedicated to the first five states of the Union — Delaware, Pennsylvania, New Jersey, Georgia and Connecticut —  and certified by NGC as being near-perfect Proof-69 Ultra Cameo (PF69UC) condition, a distinction that means your almost-flawless coins will showcase impressive full strikes and indistinguishable imperfections — well above and beyond the quality of the vast majority of coins in the series.

As the first coins in the U.S. Mint’s State Quarters series, the 1999 quarters established a popular tone that captivated collectors not just in America but around the world. Secure one of these sets for yourself or as a thoughtful gift to someone just getting his or her start in the hobby.