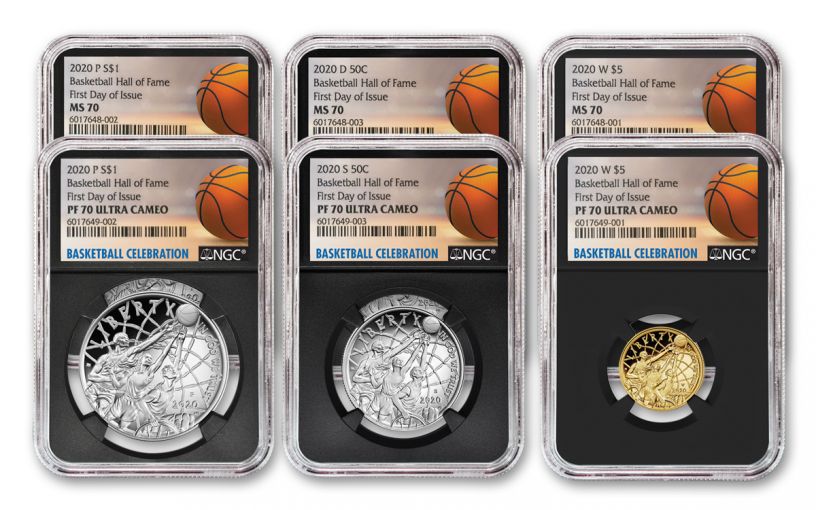 Availability: Call-In Only
This item is only available on a Call-In basis. Please call 1-800-510-6468 to speak to a representative.
Item #
361717
Add to Wish List Add to Wish List Wishlist is for registered customers. Please login or create an account to continue. Add to Compare

From the time the first game was played with peach baskets nailed to the walls at either end of a gymnasium to today’s high-flying, rim-rattling dunks, basketball has evolved from an activity played at a lone YMCA in Springfield, Massachusetts to a multi-billion dollar global sport played by some of the world’s greatest athletes. To celebrate the 60th Anniversary of the Naismith Basketball Hall of Fame in 2020, the United States Mint released its Basketball Hall of Fame Commemorative Coin Program that features a series of curved coins depicting a trio of players on one side and a detailed basketball going through a basket on the domed reverse side.

In this offer you can score the a complete six-piece set of Uncirculated and Proof coins graded by the Numismatic Guaranty Corporation (NGC) as being in Mint State-70 (MS70) and Proof-70 (PF70) condition, a distinction that means these perfectly-graded coins will have ZERO imperfections — showing all features and fields exactly as the engraver and mint intended. In addition, NGC has certified that these commemoratives are First Day of Issue (FDI) coins, meaning they were received by NGC or an NGC-approved depository by the release date or on the business day within 24 hours of the official release date.

And to really hook you in, each coin in this six-piece set has been sonically sealed in an acrylic holder and encapsulated with a special label personally signed by basketball legend Kareem Abdul-Jabbar. The NBA’s all-time leading scorer and only six-time regular-season Most Valuable Player, Abdul-Jabbar is also arguably college basketball’s greatest player, leading UCLA to an 88-2 record over three seasons and three straight NCAA championships. His famous “sky-hook” was his signature move and was almost impossible to block.

Like the Baseball Hall of Fame series that came before them, the curved nature of these coins serves to accentuate the look of a round ball. The domed basketball reverse on each coin is so detailed that you can see the hundreds of little “pebbles” that dot the surface just like a real basketball. You’ll almost feel like palming one of these “rocks” and jacking up a three-pointer! The coins in your set include:

The Naismith Basketball Hall of Fame opened in 1959 in Springfield, Massachusetts. Within its inaugural class was its namesake Dr. James Naismith, who invented the sport in 1891 to give some of his young men at the Springfield YMCA something to do during the cold New England winter. At that time the game was called “Basket Ball” and soon caught on across the country. Today, more than 175 people have been inducted into the Basketball Hall of Fame including legends like George Mikan, Bob Cousy, Bill Russell, Jerry West, Wilt Chamberlin, Kareem Abdul-Jabbar, Larry Bird, Earvin “Magic” Johnson and Michael Jordan.

Struck to commemorate the 60th Anniversary of the Naismith Basketball Hall of Fame Hall, these unique dome-shaped 2020 Basketball Hall of Fame Coins belong in everyone’s collection. Only 100 sets are available graded by NGC as MS70/PF70, certified as FDI and sealed with labels hand-signed by Kareem Abdul-Jabbar. Don’t wait; secure yours now!