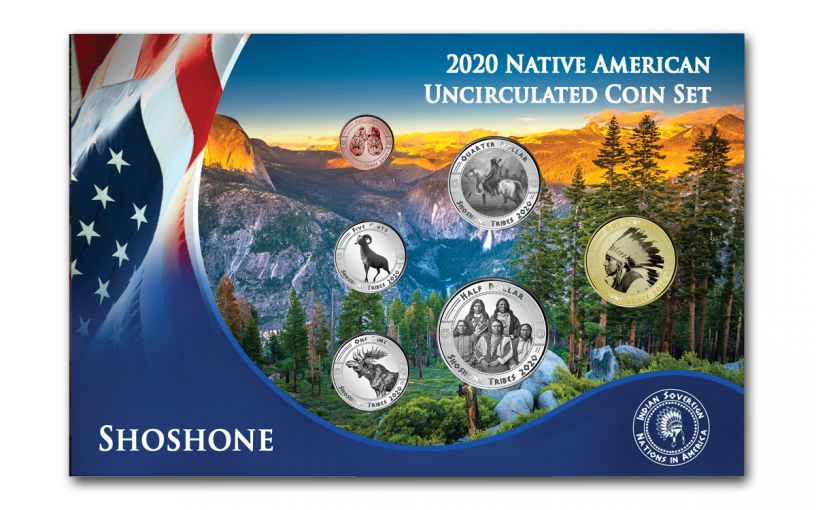 Availability: In Stock
This item will ship within 2 business days.
Item #
356778
Add to Wish List Add to Wish List Wishlist is for registered customers. Please login or create an account to continue. Add to Compare

Long before America was a nation of states, it was a nation of tribes. To honor these tribes, the Torrance, California-based Native American Mint struck a series of Indian Sovereign Nations coins that are authorized by each tribe. The coins are also recognized by the Federal Government as legal tender in each tribal nation as set forth in the Constitution of the United States and from the terms of bilateral treaties that date back to the 18th century.

With a goal of producing accurate cultural depictions of Native American tribes from across North America, the Native American Mint has added this Shoshone Tribe Six-Piece Set to its range of Tribal coins in 2020. The set contains a one-cent, five-cent, 10-cent, 25-cent, 50-cent and $1 coin, each featuring a common obverse of a snake – an image ripe with symbolism since the Shoshones were often referred to as the Snake Indians for their domain along the Snake River in the Pacific Northwest. The one-year-only reverse designs include moccasins, Rocky Mountain Sheep, a moose, a Shoshone brave fording a river on horseback, a group of Shoshone tribal leaders and Shoshone warrior in full headdress.

The Shoshone nation has a long and storied history that is integral to the America’s westward expansion in the 1800s. During the Lewis & Clark Expedition of 1804-1806, the group was aided by Sacagawea, a young Shoshone woman who helped guide the expedition and served as interpreter with the many Native American tribes encountered along the way. From 1864-1868 the Snake War fought between the Shoshones and the U.S. Army proved to be the deadliest Indian War in the nation’s history resulting in nearly 2,000 dead, wounded or captured. One of the most prominent Shoshone chiefs was Washakie, whose prowess in battle and subsequent efforts for peace in the late 1800s cemented his legacy as one of the most respected leaders in Native American history.

Each coin in your 2020 Native American Shoshone Tribe Six-Piece Set comes in original Brilliant Uncirculated (BU) condition as fresh and crisp as the day it left the mint. In addition, the complete six-piece set comes displayed in is original blister pack from the Native American Mint. The colorful blister pack also serves as the set’s Certificate of Authenticity. Secure your set today!

The 2020 Native American Mint Shoshone Tribe Six-Piece Set is a stirring one-year-only release that Wild West fans cannot pass up. Add it to your cart today!