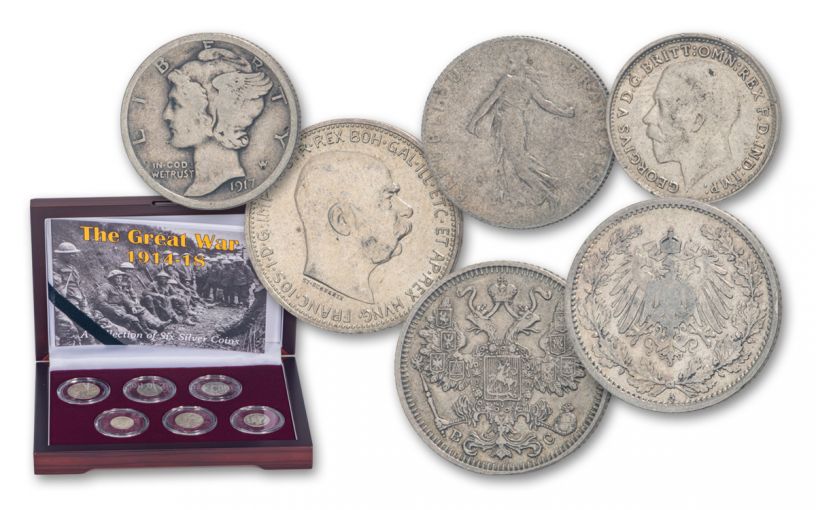 Availability: In Stock
This item will ship within 2 business days.
Item #
350936
Add to Wish List Add to Wish List Wishlist is for registered customers. Please login or create an account to continue. Add to Compare

Silver Coins of The Great War

World War I – The Great War, as it was known at the time – was a devastating, bloody conflict that included Austria, France, Germany, Great Britain, Russia and the United States. This six-coin set contains one coin from each nation, struck in 50% to 92.5% fine silver. Each coin is at least 100 years old and managed to survive years of meltings and the ravages of time just to be included in this set.

You’ll receive an Austrian Corona, French 50 Centimes, Germany Half Mark, British 3 Pence, Russia 15 Kopeks and a United States Mercury Dime, all displayed together in a wooden presentation case with a detailed storybook and a Certificate of Authenticity. That’s SIX vintage 100-year-old coins from the Great War – all for just $21.50 per coin!

Who knows where these coins have been! Recently a story was published about a Belgian solder who was carrying three French coins in his pocket during World War I. The sound of the jingling coins gave away his position, but when the German soldier who heard the noise fired his rifle, the coins stopped the bullet from killing him. None of the coins in this collection have ever stopped a bullet, but they will stop you in your tracks when you hold them in your hands and take a moment to comprehend their historical significance.

Travel back to a time when the great powers of Europe engaged in an epic conflict that ripped away the innocence of an entire generation. Reserve your Silver Coins of The Great War Six-Piece Set today and pay tribute to the noble men and women who carried these coins with them more than a century ago.