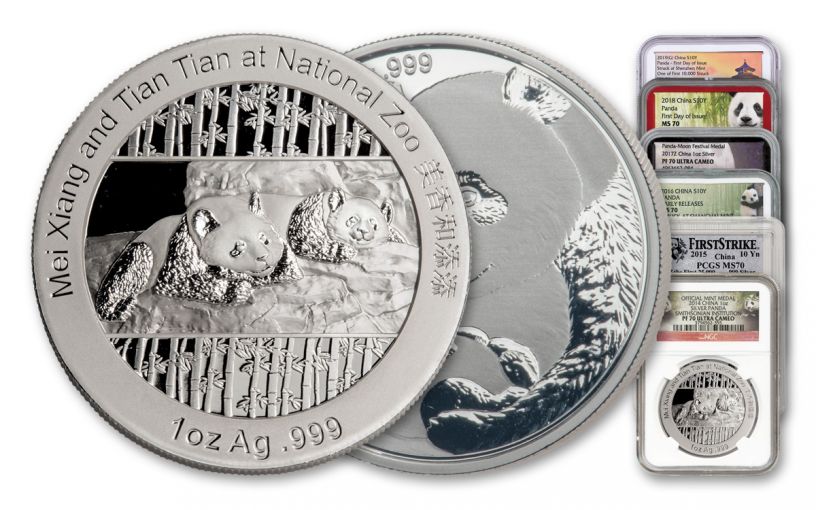 Availability: Call-In Only
This item is only available on a Call-In basis. Please call 1-800-510-6468 to speak to a representative.
Item #
355066
Add to Wish List Add to Wish List Wishlist is for registered customers. Please login or create an account to continue. Add to Compare

If you’ve been reading our print catalogs and following us online, you’ve no doubt seen many of our various Panda-themed offerings. If you’ve been wondering what all fuss is about and would like to get in on the worldwide coin-collecting phenomenon known as the Panda Explosion, then this is the set for you!

We’ve assembled six different coins from China’s immensely popular Panda Series for you to enjoy – all in flawless Proof or Uncirculated Mint condition. Struck from 2014 to 2019, the coins in this set represent firsts, lasts and special anniversary issues. And to help you get up to speed in the exciting world of Panda coin collecting, we’re also including Peter Anthony’s book Gold and Silver Panda Coin Buyer’s Guide. But let’s get back to the set:

Different weights, anniversaries, designations, finishes and more. It’s the perfect way to start your Panda collecting journey. Plus, each set will come beautifully houses in a wooden presentation box. Good luck and hurry up – this is an exclusive set featuring versions of these coins you won’t find anywhere else!