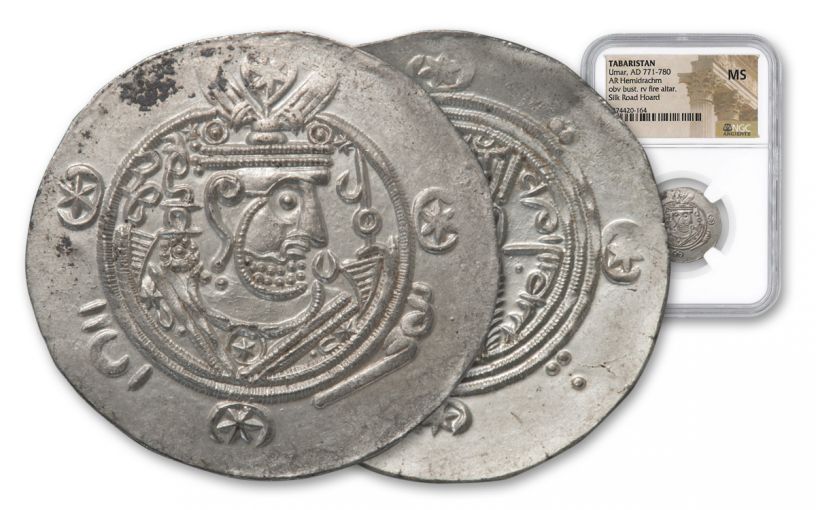 Availability: Out of Stock
This item is currently Out of Stock. Please sign up to be notified if this product becomes available.
Item #
313476
Add to Wish List Add to Wish List Wishlist is for registered customers. Please login or create an account to continue. Add to Compare

1) These coins were used on the Silk Road – an ancient trade route that connected Constantinople to China - over 1200 years ago.

2) All coins in the Silk Road Hoard are graded by NGC as either Mint State or Choice Mint State.

Through a stroke of good fortune, GovMint.com is pleased to be able to offer a stunningly well-preserved hoard of over 1200 year-old Tabaristan Silver Hemidrachms, with many attributed to individual rulers!

Located along the shore of the Caspian Sea, the Kingdom of Tabaristan was along the main northern trade route of the Great Silk Road, which stretched 7,000 miles from the Far East Chinese city of Chang'an to Constantinople. After the Roman Empire fell into the Dark Ages, regions like Tabaristan, grew and thrived because of its location on the trade route.

The now famous route served as not only a means to trade luxury items, but to exchange culture and philosophical ideals. A coin often found in the purses of traders was the Tabaristan Silver Hemidrachm. It’s hard to believe that after 1,200 years that these coins are in such great condition.

Issued by Umar, Governor of Tabaristan and struck between 771-780 A.D. at the Tabaristan Mint, the obverse of the Silver Hemidrachm features a crowned Sassanian style bust facing right in a winged crown. Fire, the patron god of the Kingdom of Tabaristan, appears on the reverse, in a traditional fire altar, flanked by two standing figures.

Every coin has been examined by our experts, then certified and graded in Mint Sate condition by Numismatic Guarantee Corporation, (NGC).

Each coin comes in the popular Story Vault holder, which contains the NGC certified coin and an illustrated story card that tells the story of the Silk Road. Now you can have the unique opportunity to own a coin struck in the 8th century in museum quality condition, but don’t delay they won’t be in our vault for long.