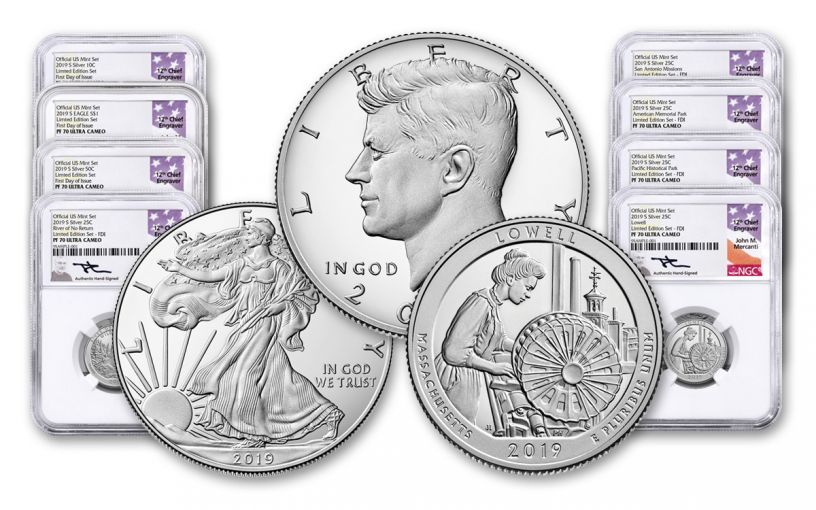 Availability: Call-In Only
This item is only available on a Call-In basis. Please call 1-800-510-6468 to speak to a representative.
Item #
354835
Add to Wish List Add to Wish List Wishlist is for registered customers. Please login or create an account to continue. Add to Compare

Each year, the United States Mint’s Proof and Uncirculated coin sets make their way to hundreds of thousands of collectors. However, there is a far more prized set: the Limited Edition SILVER Proof Set! Released each year only after the other two sets have made their appearance, it’s a highly desirable set available in much smaller quantities and consists of silver and only silver!

In 2019, the Mint took the Limited Edition Silver Proof Set into a new and exciting stratosphere by upping the silver quotient from 90% to 99.9% – a dramatic uptick in precious metal purity that saw these sets surging in popularity. But that wasn’t all the Mint did: It also, for the first time, included that year’s Silver American Eagle which had never been included in previous Limited Edition Silver Proof Sets!

Besides the Silver Eagle Dollar, this set includes a 2019 issue of the Kennedy Half Dollar, Roosevelt Dime and all five American the Beautiful Quarters® (Massachusetts, Northern Mariana Islands, Guam, Texas and Idaho). And, since each coin was struck at the San Francisco Mint – a mint known around the world for its exquisite strikes – all eight proofs feature the “S” mintmark. The 2019 United States Mint Limited Edition Silver Proof Set is without a doubt one of the most impressive silver proof sets in the world. For fans of American coinage, it represents the peak of gleaming perfection and the epitome of the minter’s art.

In fact, each coin in the sets we have available here have been graded by the Numismatic Guaranty Corporation (NGC) as being in flawless Proof-70 Ultra Cameo (PF70 UC) condition, a distinction that means these perfectly-graded proofs will have ZERO imperfections – showing all features and fields exactly as the engraver and mint intended! In addition, NFGC has also certified that these silver proofs are First Day of Issue (FDI) coins, meaning that they were received by NGC or an NGC-approved depository by the release date or on the business day within 24 hours of the official release date.

As if that weren’t enough, each coin in this set has been sonically sealed in an acrylic holder and encapsulated with a label personally signed by the legendary John M. Mercanti, the U.S. Mint’s 12th Chief Engraver! A giant in the numismatic world, Mercanti has produced more coin and medal designs than any person in U.S. Mint history!

While 50,000 of these sets were produced, only 500 – just 1% of the total mintage – were certified by NGC as PF70UC and FDI with hand-signed labels – and less than 200 are left. Don’t miss out; click this impressive set to your cart today before our remaining supply evaporates.

All silver all the time; secure the 2019 United States Mint Limited Edition Silver Proof Set issued for the first time in 99.9% silver. Get all five quarters, the half-dollar, dime AND that year’s Silver Eagle with the “S” mint mark – all in the highest grade possible and encapsulated with labels signed by John Mercanti! Order yours now!