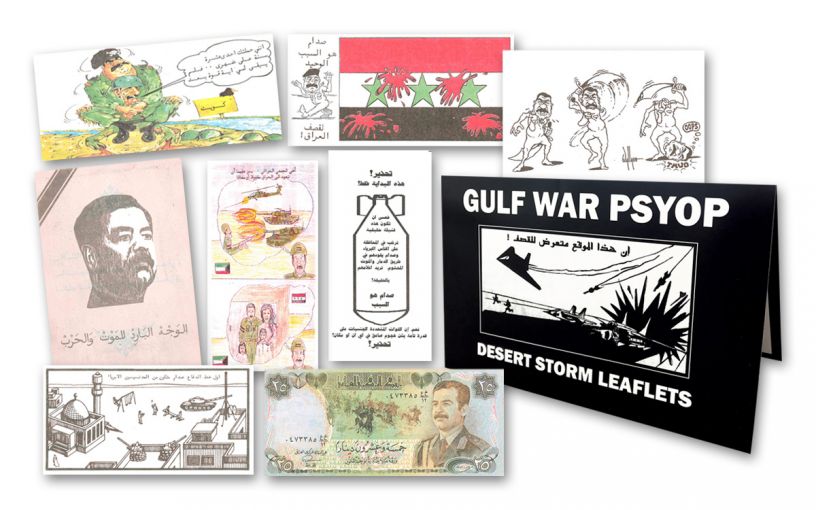 Availability: In Stock
This item will ship within 2 business days.
Item #
354199
Add to Wish List Add to Wish List Wishlist is for registered customers. Please login or create an account to continue. Add to Compare

Messages From the Sky: The Gulf War Leaflets Collection

From 1990 to 1991 during the first Persian Gulf War – codenamed at the time as Desert Shield and Desert Storm – American-led coalition air force units dropped thousands upon thousands of banknote-leaflets over Iraq that helped erode the morale of the Iraqi troops by predicting death and destruction to soldiers who fought for Iraqi Dictator Saddam Hussein. According to some sources, coalition forces dropped around 29 million leaflets during the First Gulf War. You might say this was the Mother of All Propaganda Leaflet Drops!

Stuffed into fiberglass bombs, the notes were spread over specific areas with pinpoint accuracy, exploding a few thousand feet above the ground. But who decided what specific messages to spread to the people of Iraq? That would be the CIA’s Psychological Operations (PSYOP) division! The basic leaflet themes were “surrender,” “inevitability of defeat,” “abandon equipment and flee” and “Saddam is to blame.” The leaflets were dropped every three hours over Iraqi defensive positions in an unrelenting psychological campaign. Was it successful? According to military records, 98% of all Iraqi troops taken prisoner had seen the leaflets, 88% believed the messages, and 70% said the leaflet message influenced their decision to surrender.

This Gulf War Leaflets Collection presents eight different types of banknotes and leaflets from the First Persian Gulf War along with a guide that explains what each note and leaflet says. The set comes secured in a protective vinyl sleeve that’s perfect for displaying anywhere. It’s a fascinating piece of American history that no military collector should be without! Add it to your collection or secure it as an exciting and memorable gift for someone you know.