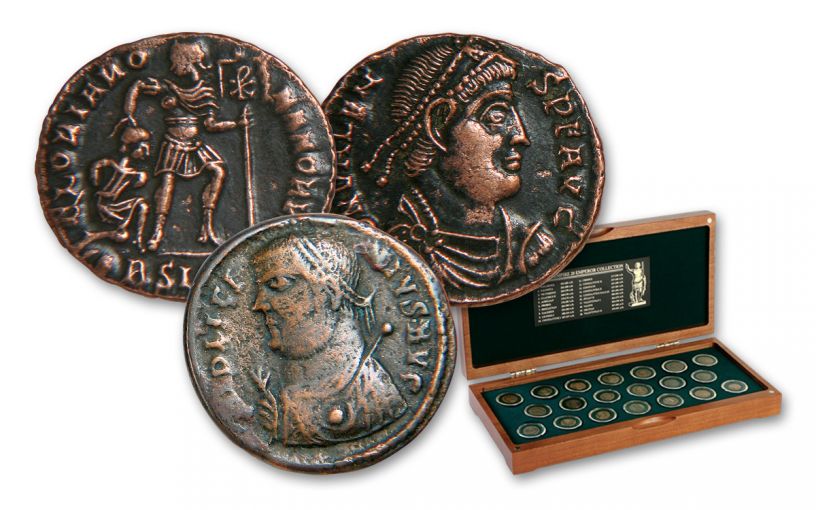 Availability: In Stock
This item will ship within 2 business days.
Item #
333518
CC Payments as low as
$265.00 / month
Add to Wish List Add to Wish List Wishlist is for registered customers. Please login or create an account to continue. Add to Compare

The story of the Roman Empire reads like a script for a trashy primetime television soap opera. It’s an epic history filled with great conflicts, compelling love stories, and some of the most treacherous leaders of all time. It’s like Game of Thrones without the fire-breathing dragons! It’s that history that has made finding coins from the Roman Empire a popular pastime for both historians and coin collectors alike – and why the museum-quality set of Roman coins available in this offer is an absolute “must-have” for any collection!

This beautiful collection is a veritable time capsule that brings together 20 different ancient Roman coins. The collection celebrates the empire at its apex before it lost Gaul and Palmyra, and then marks its slow decline and eventual collapse. Struck between A.D. 253 and 383, each coin has been hand-selected just for this set, and comes in its own display capsule to allow for safe, careful examination as you walk in the steps of the Roman emperors.

The Roman Empire is arguably the greatest Empire ever to exist with a far-reaching influence that is still felt in today’s modern world. Rome’s culture, art, philosophy, and towering architecture are still embedded in our modern world. The Romans left behind a legacy of innovation; their massive network of roads existed before the birth of Jesus, they had public sewer systems 1,500 years before the United States declared its independence, and they had a great system of aqueducts to bring water to their burgeoning cities and farms. The tactics of their great generals like Julius Caesar remain mandatory study by today’s military leaders.

Each coin in this set tells its own story and was struck under the authority of a different emperor. The coins served two purposes: they were needed to pay for goods and services and, perhaps more importantly, they served as symbol of who the emperor was. The collection comes complete in a deluxe wooden presentation case along with a fact-filled story booklet.

All roads may lead to Rome, as the saying goes, but if you act now, this piece of the Roman Empire will find its way to you!