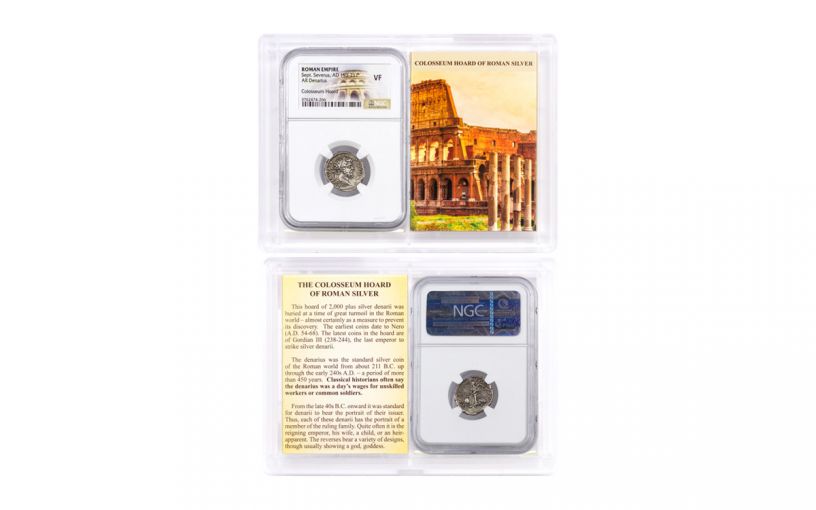 Availability: Out of Stock
This item is currently Out of Stock. Please sign up to be notified if this product becomes available.
Item #
346356
Add to Wish List Add to Wish List Wishlist is for registered customers. Please login or create an account to continue. Add to Compare
Product Description

Beautiful coins from of the Roman Empire are among the most popular and coveted pieces in any collection of historic coins. Of those, the most desired are pieces struck when Rome was at the peak of its power, such as these stunning Silver Denarius coins struck from AD 198-217 during the lifetime of Caracalla, an emperor who had such a thirst for power that he had his own brother murdered in cold blood. Though a strict disciple of military doctrine, it was his own soldiers who did him in, however, marking the beginning of a tumultuous time that helped bring about the Fall of the Roman Empire.

The son of Emperor Septimius Severus, Caracalla and his brother Geta were named by their father as co-emperors in 198 and 209 respectively. Though Severus intended for them to rule jointly after his death, Caracalla had his younger brother murdered – reportedly stabbed to death in their mother’s arms – during a supposed peace conference between the two a few months after their father’s death in 211. Caracalla felt so “guilty” about his deed that he put to death hundreds of people who in any way showed support to his dearly departed brother—including 20,000 people in Alexandria for having the audacity to produce a satire that Caracalla felt mocked him. Caracalla further had Geta’s name and likeness stricken from public records and made it a crime punishable by death to even speak or write his name! Caracalla did not have long to bask in his new-found power for just a few years later he was stabbed to death while urinating on the side of the road by a soldier upset that the hot-headed emperor had passed him over for promotion.

This silver denarius is considered to be one of the most important coins of that era. It circulated heavily throughout the Roman Empire and was used in all forms of payment from shopping in the market to paying soldiers in the service of Rome. Finding one of these coins in nice condition is next to impossible, but fortunately for you we’ve secured a portion of the Seven HIlls Hoard of these silver denarius coins that are absolutely magnificent. They are so nice that each was professionally certified and graded by the Numismatic Guaranty Corporation (NGC) as being in Choice Very Fine (Ch VF) condition! The obverse of each coin features the bust of Caracalla. The reverse designs vary, but each features a god, goddess or personification representing something characteristic about Caracalla.

Don’t miss your chance to travel back in time and hold a piece of the Roman Empire in your hand when Rome was the center of the universe. Each also comes in a Story Vault holder with a fact-filled storycard. Add this Silver Denarius of Emperor Caracalla to your cart and become a curator of world history today!