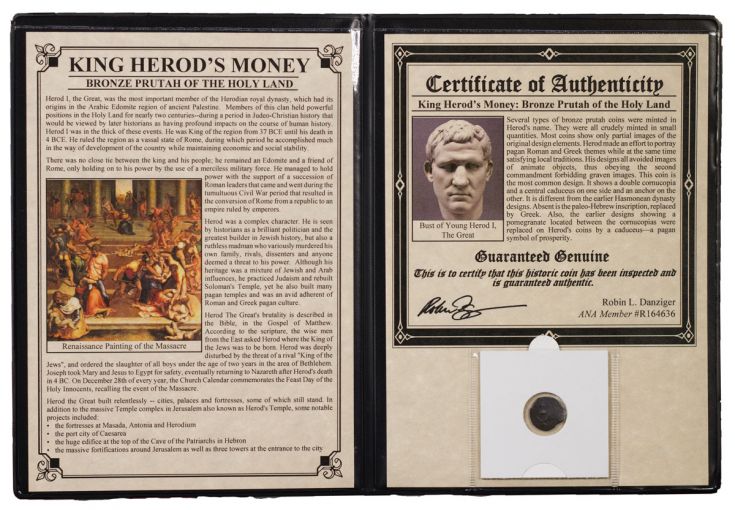 Availability: Out of Stock
This item is currently Out of Stock. Please sign up to be notified if this product becomes available.
Item #
320069
Add to Wish List Add to Wish List Wishlist is for registered customers. Please login or create an account to continue. Add to Compare

One of the most beloved Nativity stories tells of how the Wise Men of the East, who, after discerning in the stars an astrological sign announcing the birth of a new King of the Jews, traveled to Bethlehem bearing gifts for the new king. The dark side of that story is what happened after these Oriental Magi were brought face-to-face with King Herod the Great. By this time, Herod was nearing 70 years old and had reigned over Judaea for more than 30 years. Upon extracting the purpose of their journey from the Magi, Herod, in a massive fit of paranoia, ordered the murder of every male child under the age of 2 to prevent his future rival from growing up to replace him on the throne. Warned by an angel, Joseph, the husband of Mary, hustled his wife and the baby Jesus out of Egypt and escaped the impending massacre that has now been termed as the Slaughter of the Innocents as told by the Gospel of Matthew 2:1-20 in the New Testament.

Herod was not exactly a popular king to the Jews. After all, he only became king thanks to his loyalty to Rome during the Parthian War. In fact, following his installation ceremony in Rome in 37 BC, Herod, the so-called king of the Jews, offered a sacrifice to Jupiter, the chief deity in the Roman imperial religion! As a king who reigned for more than 40 years, however, Herod was bound to leave a lasting impact. Two of his most lasting contributions to Judaea were the expansion of the Second Temple in Jerusalem – known as Herod's Temple – and the construction of the port at Caesarea Maritima – named in honor of his patron, Caesar Augustus.

These ancient Judaean Bronze Prutahs not only hail from a time when the baby Jesus would have taken his first steps, but effectively represent the reign of Herod in symbolic detail. Continuing a Jewish tradition, the coins refrain from showing a graven image (object of worship). Instead, the coin depicts an anchor, which commemorates the founding of the port of Caesarea, accompanied by the inscription HPW BACIA, meaning “of King Herod.” The coin’s reverse features a caduceus surrounded by two curving Judean double horns of plenty, more commonly known as cornucopia. The image is similar to earlier Hasmonean Dynasty designs, with the addition of the caduceus, a pagan symbol representing prosperity.

This Roman Empire Bronze Prutah has been reviewed and authenticated by the American Numismatic Association (ANA) as a coin issued by Herod the Great between 40 BC and AD 4. Each coin will come beautifully presented in a collectible album with a signed Certificate of Authenticity, along with a fact-filled storycard that tells about the life of King Herod, including significant events of his rule and his impact on Jewish history. Own a piece of history with a direct tie to the New Testament. It will make a terrific addition to your collection of ancient coins or a thoughtful gift.