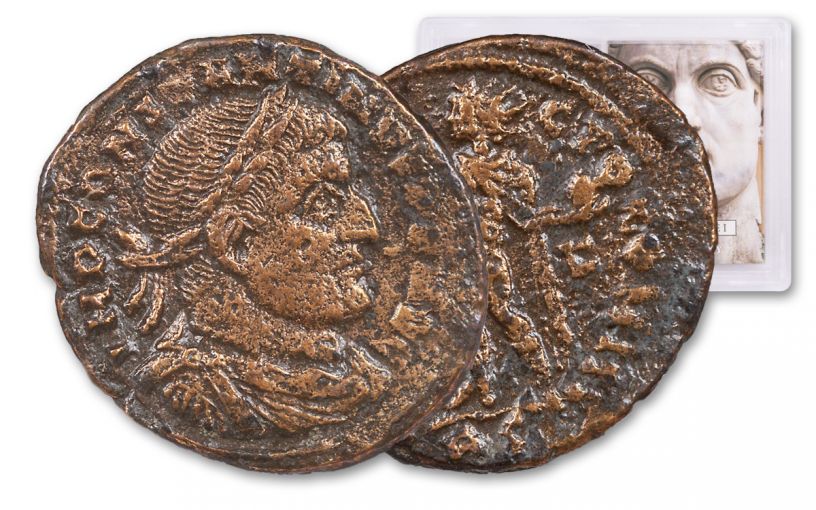 Availability: In Stock
This item will ship within 2 business days.
Item #
357580
Add to Wish List Add to Wish List Wishlist is for registered customers. Please login or create an account to continue. Add to Compare

The First Coin of Christianity

Constantine the Great was the world’s first Christian Emperor. But he didn’t start out that way...

Ruling from A.D. 307 to 337, Constantine began his reign as a worshiper of Sol Invictus, “The Unconquerable Sun.” But after a vision of the Cross led to him to victory in battle and his subsequent rise to being crowned the sole Emperor of the Roman Empire, Constantine literally “saw the light” and shifted his beliefs.

Believing that Sol Invictus and Christ were one and the same, Constantine legalized Christianity, allowing it to flourish. He merged the worship of Sol Invictus and Christ, creating religious practices still observed by modern-day Christians like observing Christmas on December 25th and celebrating Easter to the first Sunday after the first full moon of the vernal equinox. He also authorized the striking of this bronze Nummus coin – the first true coin of a Christian Empire, and thus the most important coin of Christian history.

We recently located a cache of these 1,600-year-old coins, each featuring Sol Invictus on its obverse. This was a savvy move by Constantine, who was converting the Roman Empire to Christianity with a merging of religions. It wasn’t until A.D. 692 that an image of Christ appeared on circulating coinage – a full 355 years after this coin was struck. As Constantine used the image of Sol Invictus to spread the Christian gospel, this is truly the first coin of Jesus Christ!

For nearly seventeen centuries, these stunning coins have survived earthquakes, floods, and the rise and fall of empires. Although there are many coins of the Constantine dynasty, most that survive are in very poor condition and appear flat and worn out – but not these coins! Each piece in this offer has been individually authenticated and certified by the Numismatic Guaranty Corporation (NGC) as being in incredible Very Fine (VF) condition – almost as good as new!