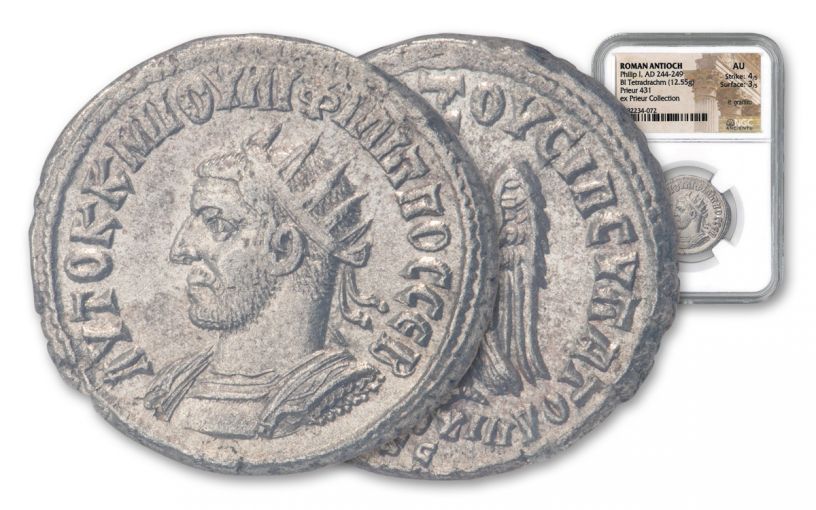 Availability: Out of Stock
This item is currently Out of Stock. Please sign up to be notified if this product becomes available.
Item #
348354
Add to Wish List Add to Wish List Wishlist is for registered customers. Please login or create an account to continue. Add to Compare

Rare Antioch Tetradrachm of Philip I From the Michel Prieur Collection!

Antioch – the city where, according to the Bible, Christians were first called Christians. The people there were known for their skepticism, and featured Tyche, the goddess of fortune, on their coins rather than the typical image of Hercules, Athena or Zeus.

In the world of coins, you can’t talk about Antioch without bringing up Michel Prieur, the unchallenged world expert on the Roman Provincial coinage from the city. His vast collection may be the most famous Roman coin collection of the millennium – and we’ve secured a number of rare Tetradrachms of Emperor Philip I, the first Christian Roman Emperor, from his collection!

Struck in Antioch between the years 244 and 249, this coin comes certified by the Numismatic Guaranty Corporation (NGC) as being in amazing About Uncirculated (AU) condition and pedigreed as having once been a part of the Prieur Collection. In addition, it was personally catalogued by Prieur and will arrive along with his original envelope. You’ll also receive the Prieur Collection book, The Syro-Phoenician Tetradrachms and Their Fraction, an authoritative treatise written by Michael Prieur and his wife Karin Prieur that is the undisputed standard reference to this interesting field of numismatics.

Roman Emperor Philip I (204-249) is more commonly known by his nickname, Philip the Arab, thanks to his birth in the Syrian city of Shahba then located within the Roman Empire’s Arabian province. Many historians believe he was the first Christian emperor due to his confession of sins before being allowed to enter a church during an Easter vigil mass. His favorable treatment of Christians helped reinforce this view.

A competent military leader as well as an excellent administrator, Philip was betrayed by his successor, Decius, who not only murdered Philip and his 11-year-old son following the coup but put to death many prominent Christians including Pope Fabian in a bloody persecution aimed at strengthening the Roman state and its polytheistic religion. Decius didn’t last long, however; he was killed two years later amid a series of events that epitomized the Crisis of the Third Century, a 50-year period from 235-284 in which at least 26 men staked claimed to the title of emperor.