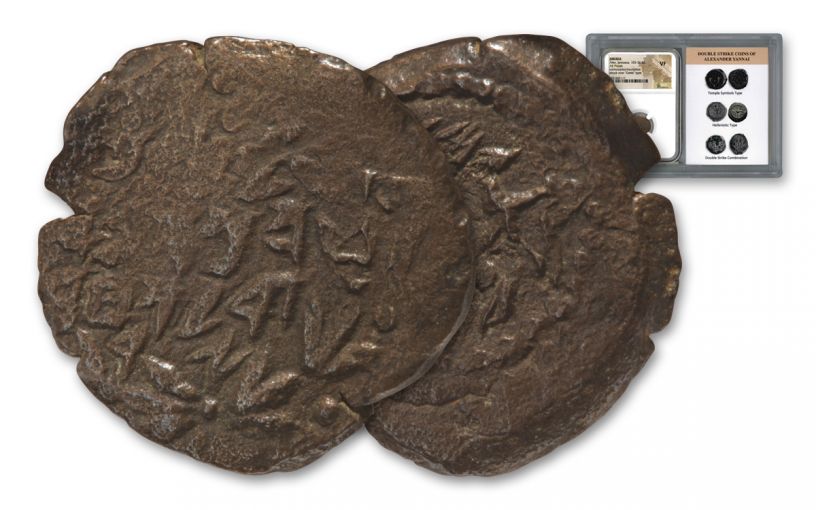 Availability: In Stock
This item will ship within 2 business days.
Item #
332041
Add to Wish List Add to Wish List Wishlist is for registered customers. Please login or create an account to continue. Add to Compare

For two millennia, the Widow’s Mite has had a connection to Jesus and the Holy Land. But did you know that this tiny coin also sparked a cultural war? It happened after Alexander Yannai, who ruled Judaea from 103-76 BC took a Greek name, “Jannaeus” and called himself “King” instead of “High Priest.” The war started with Jannaeus ordering the massacre of more than 6,000 people in the Temple courtyard during the Jewish holiday of the Feast of Tabernacles after they protested against his new title. The resulting civil war lasted six years and left 50,000 Judeans dead. Jannaeus was victorious only because the rebels ultimately decided that it was better to live under the reign of a terrible Jewish king than under the thumb of foreign mercenaries.

But history would have the last word and many bronze Widow’s Mites were eventually re-struck to remove the title. The mites in this offering are the double struck variety and even feature evidence of both designs, making each one a living piece of ancient history! Each has been graded in Very Fine (VF) condition by the Numismatic Guaranty Corporation (NGC).

The Widow’s Mite is the most fascinating of the New Testament coins. The "mite" or "prutah" was the smallest of the bronze coins of the Jews. These coins were frequently mentioned in the New Testament manuscripts as we can read in Mark 12:41-44: "And He sat down over against the treasury, and beheld how the multitude cast money into the treasury; and many that were rich cast in much. And there came a poor widow, and she cast in two mites, which make a penny. And he called unto him his disciples, and said unto them, Verily I say unto you, this poor widow cast in more than all they are casting into the treasury: for they did cast in of their superfluity; but she of her want did cast in all that she had, even all her living." Imagine holding this coin in your hand and retelling the story Jesus told over 2000 years ago!

These coins are the most exciting and controversial of all the coins that circulated during the time of Jesus. They were widely used throughout Jerusalem and the Holy land until the destruction of the Temple in 70 AD. Just think about whose hands may have held them! Few of these coins still exist today, making this a rare variety of an already highly sought-after ancient coin. Like the High Priest’s new title, this opportunity may not last long. Secure yours today!