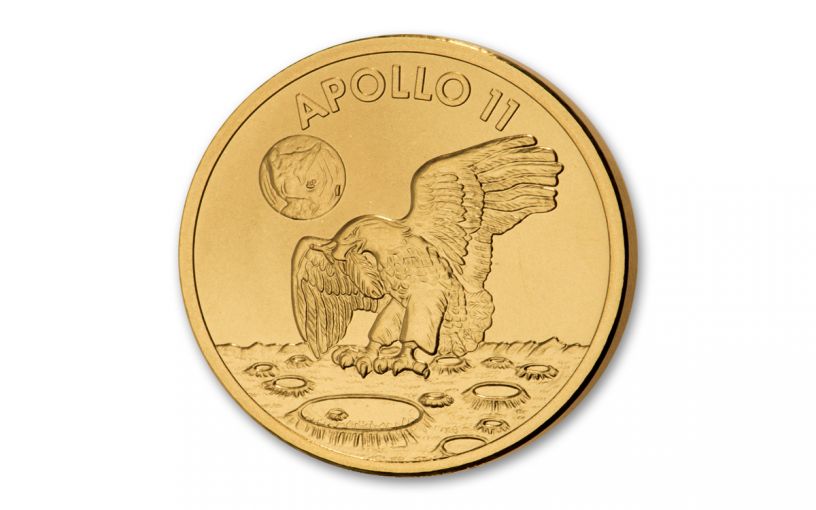 Availability: Out of Stock
This item is currently Out of Stock. Please sign up to be notified if this product becomes available.
Item #
340065
Add to Wish List Add to Wish List Wishlist is for registered customers. Please login or create an account to continue. Add to Compare

Struck in a half ounce of 99.99% gold, this Apollo 11commemorative replicates the original medal’s design with an American Eagle landing on the moon on the obverse. On the reverse you’ll find the three names of the astronauts and the Launched, Landed and Returned dates just like on the original medal. In celebration of this historic event, the engravings of “50th Anniversary” and “1969-2019” have been added to the design. Your Apollo 11 50th Anniversary Commemorative Half-Ounce Gold Medal has been specially to closely match the appearance of the original medals. This antiqued Matte Proof finish has a softer appearance than a regular proof coin and adds a touch of history and nostalgia to this very important piece.

Just 2,019 of these medals will be struck – one each for the 50th anniversary year. Plus, each will arrive in its own presentation case and accompanied by a numbered certificate of authenticity and an informative storycard. Coin collectors, history buffs, fans of space and science, and people who enjoy owning pieces of Americana will all be clamoring for this historic medal so order yours now!

If there was ever a numismatic collectible that was described as being “out of this world,” it would be these Apollo 11 Fiftieth Anniversary Commemorative Gold Medals. Secure one now and own a piece of history!