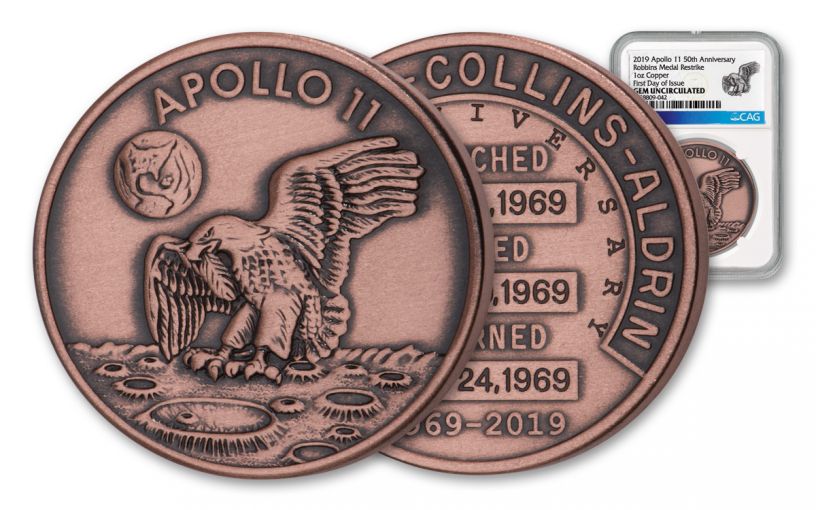 Availability: Available for Order
This item will ship 04/10/20
Item #
339749
Review this product
Add to Wish List Add to Wish List Wishlist is for registered customers. Please login or create an account to continue. Add to Compare
Product Description

The fact that the Robbins Medals were actually flown aboard the space missions, were closely associated with the astronauts, and are seldom available and only in restricted quantities make them highly sought-after collectibles on the few times they are available. But now, thanks to GovMint’s standing in the numismatic world, we have been able to partner with Neil Armstrong’s son, Mark, to use the original dies of the historic Apollo 11 Robbins Medals and made new dies to create these commemorative medals celebrating the 50th anniversary of the Apollo 11 mission!

Struck in one ounce of copper, this Apollo 11 medal replicates the original medal’s design with an American Eagle landing on the moon on the obverse. On the medal’s reverse you’ll find the three names of the astronauts and the Launched, Landed and Returned dates just like on the original medal. In celebration of this historic event, the engravings of “50th Anniversary” and “1969-2019” have been added to the design.

Your Apollo 11 Fiftieth Anniversary Robbins Medal Restrike has been graded by Collectibles Authentication Guaranty (CAG) – an affiliate of the Numismatic Guaranty Corporation (NGC) – as being in Gem Uncirculated condition, a distinction that means your medal is the product of a superb strike that places it firmly among the elite of the run! It will come encapsulated in in an acrylic holder with an exclusive NGC/CAG co-branded label that includes an image taken from the Robbins Medal with the surface of the moon in the background.

The medals will be struck for one year and one year only – from July 20, 2018 through July 20, 2019 – the 50th anniversary of the day that Neil Armstrong became the first man on the moon. Coin collectors, history buffs, fans of space and science, and people who enjoy owning pieces of Americana will all be clamoring for this historic medal. With potentially millions of people around the world who would like to own this medal, you should add one to your cart now before it escapes your orbit forever!

If there was ever a numismatic collectible that was described as being “out of this world,” it would be these Apollo 11 Fiftieth Anniversary Robbins Medal Restrikes. Secure one now and own a piece of history!