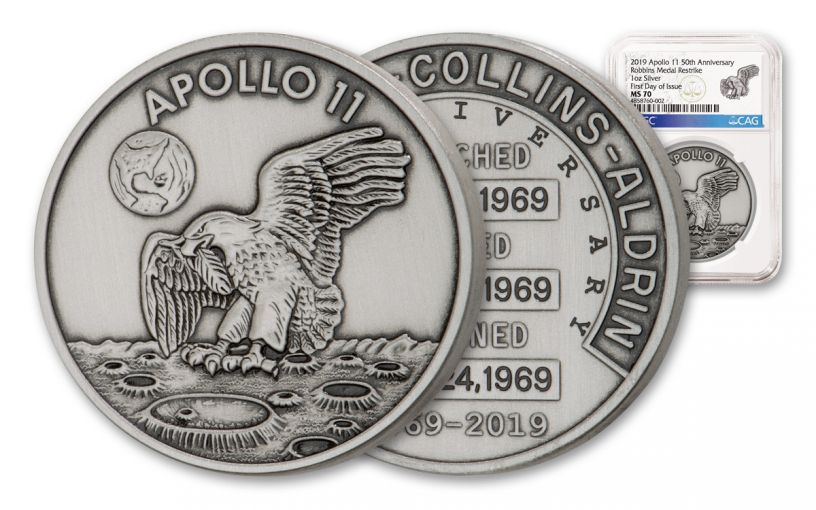 Availability: Call-In Only
This item is only available on a Call-In basis. Please call 1-800-510-6468 to speak to a representative.
Item #
339843
Add to Wish List Add to Wish List Wishlist is for registered customers. Please login or create an account to continue. Add to Compare

Struck in one ounce of 99.9% silver, this Apollo 11commemorative replicates the original medal’s design with an American Eagle landing on the moon on the obverse. On the reverse you’ll find the three names of the astronauts and the Launched, Landed and Returned dates just like on the original medal. In celebration of this historic event, the engravings of “50th Anniversary” and “1969-2019” have been added to the design. In addition, each silver medal has also been selectively layered with a metal alloy that has actually flown on an Apollo mission!

Your Apollo 11 50th Anniversary Commemorative One-Ounce Silver Medal has been graded by the Numismatic Guaranty Corporation (NGC) as being in perfect Mint State-70 (MS70) condition, a distinction that means your perfectly-graded medal will have ZERO imperfections – showing all features and fields exactly as the engraver and mint intended! NGC has also graded your medal to be a First Day of Issue (FDI) piece, meaning it was received by NGC by the release date or on the business day within 24 hours of the official release date.

Each medal will arrive in its own presentation case and accompanied by a numbered certificate of authenticity and an informative storycard. Coin collectors, history buffs, fans of space and science, and people who enjoy owning pieces of Americana will all be clamoring for this historic medal. And while the limited edition for this piece is just 25,000, the number that will come in this pristine grade and certification is vastly smaller. Order yours now!