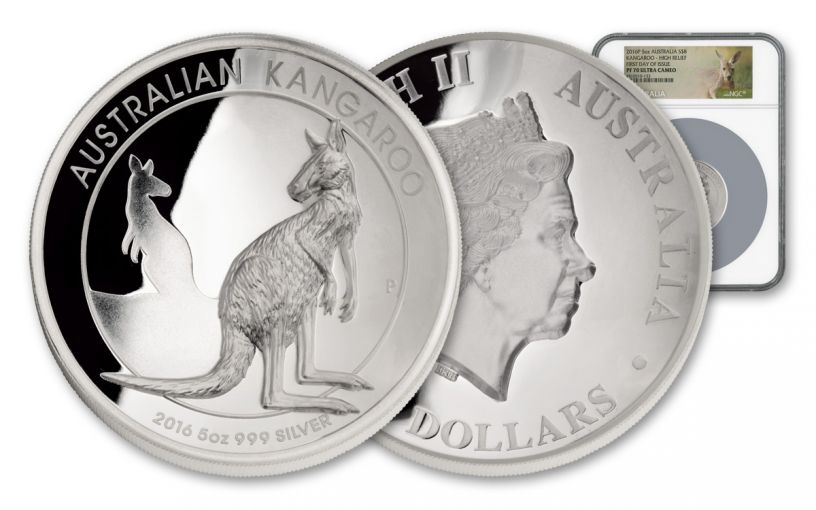 Availability: Out of Stock
This item is currently Out of Stock. Please sign up to be notified if this product becomes available.
Item #
298484
Add to Wish List Add to Wish List Wishlist is for registered customers. Please login or create an account to continue. Add to Compare

Struck by the world-renowned Perth Mint on the West Coast of Australia, the Silver Australian Kangaroo is one of the most popular coin series on the planet, with a decades-long tradition of combining high precious metal purity with stunningly detailed designs. So, we were shocked when our buyers were still able to locate these amazing 2016 Five-Ounce Silver Kangaroo High Relief Proofs – the first of their kind to be officially approved by Perth Mint and certified by the Numismatic Guaranty Corporation as being First Day of Issue (FDI) coins!

To attain an FDI certification from NGC, a coin must be received by NGC or an NGC-approved depository by the release date or on the business day within 24 hours of the official release date. Collectors seek out these coins because they are produced with new dies and considered to have sharper strikes and deeper mirrors than those that are struck later. Each coin in this offer coms sonically sealed in an acrylic holder with an exclusive Kangaroo label.

In addition, each coin was struck in stunning double-sided high relief with a one-year-only design on the reverse that depicts an adult kangaroo resting on its haunches with the silhouette of another kangaroo in the background. Coined by the Perth Mint under the authority of the Australian government, each proof is $8 legal tender in Australia, and displays an effigy of Queen Elizabeth II on the obverse.

You’ll be absolutely thrilled by how incredible these high-relief designs appear minted in five full ounces of 99.9% fine silver! As a testament to the quality and craftsmanship of these coins, NGC has graded them as being in flawless Proof-70 Ultra Cameo (PF70UC) condition, a distinction that means your perfectly-graded proof will have ZERO imperfections – showing all features and fields exactly as the engraver and mint intended.

Collectors are always scrambling to find first-ever issues and designations. Not only is this proof an incredible piece of numismatic art, but it’s also flawless coin that was among the very first struck in the series. With just 1,000 of the fabulous coins ever struck, there are simply not enough to go around. So, hop to it and secure this first-ever FDI Five-Ounce Silver Kangaroo now!

There’s still time to get one of these first-ever NGC-certified First Day of Issue 2016 Australia Five-Ounce Silver Kangaroo High-Relief Proofs. Don’t miss out; click one to your cart today!