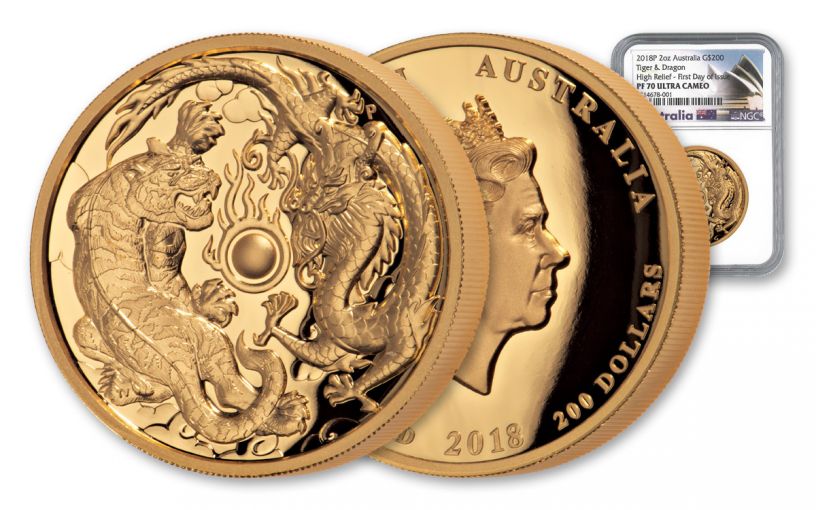 Availability: Out of Stock
This item is currently Out of Stock. Please sign up to be notified if this product becomes available.
Item #
334121
Add to Wish List Add to Wish List Wishlist is for registered customers. Please login or create an account to continue. Add to Compare
Recommended Products
Product Description

Struck in two ounces of 99.99% gold, the legal tender proof pays tribute to the Tiger and Dragon on a gleaming proof coin rife with symbolism. The 2018 Australia Tiger and Dragon High Relief Two-Ounce Gold Proof not only shows the tiger and dragon matched in a never-ending contest of wills, but it shows the reason for the conflict: the flaming pearl of knowledge! Of particular note is the incredible high relief sculpting on these coins. The detail is so remarkable that it almost seems like you’re holding a vintage Chinese bas relief carving that shows the tiger and dragon continuously circling the flaming pearl of knowledge in a perpetual dance of symmetry.

The follow-up to the Perth Mint’s wildly successful 2017 Dragon and Phoenix release, the 2018 Australia Tiger and Dragon High Relief Two-Ounce Gold Proof is from a maximum worldwide mintage of just 1,500 coins. In addition, your coin been graded by the Numismatic Guaranty Corporation (NGC) as being in flawless Proof-70 Ultra Cameo (PF70UC) condition, a distinction that means your perfectly-graded proof will have ZERO imperfections – showing all features and fields exactly as the engraver and mint intended. In addition, NGC has certified your Tiger and Dragon Gold Proof to be a First Day of Issue (FDI) coin, a designation that it was received by NGC or an NGC-approved depository by the release date or on the business day within 24 hours of the official release date. It will come in an acrylic holder with an exclusive Sydney Opera House label.

Devotees of Chinese culture, coin collectors and gold stackers are all sure to want a piece of this extremely limited release – and that doesn’t even include the millions of Chinese collectors eager to amass anything that pays tribute to their rich cultural heritage. Don’t be left empty-handed, reserve yours today!

Don’t miss your chance to capture the balance and beauty of the 2018 Australia Tiger and Dragon High Relief Two-Ounce Gold Proof. It’s available now only while supplies last so add one to your cart today!