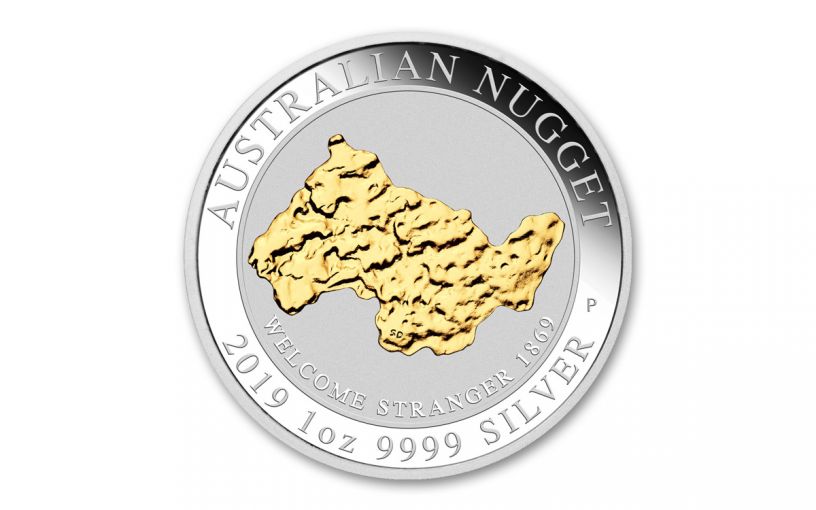 Availability: In Stock
This item will ship within 2 business days.
Item #
350391
Add to Wish List Add to Wish List Wishlist is for registered customers. Please login or create an account to continue. Add to Compare

During the heyday of the Australian Gold Rush era of the late 1800s, old timers used to regale tenderfoots with tales about gold nuggets being so big that prospectors were known to trip over them. But these stories were not just mere hogwash conjured up around the campfire to tease novice gold seekers – some of these stories were the God’s honest truth! Take the discovery of the “Welcome Stranger” nugget: Weighing in at more than 145 pounds, it was – and still is – the world’s largest alluvial gold nugget ever found!

Now, in honor of the 150th anniversary of the famous nugget’s discovery in 1869, Australia’s award-winning Perth Mint has issued its own “nugget” – a spectacular masterpiece struck in a full ounce of 99.99% pure silver! Based on actual photographs of the golden behemoth, the design on this coin shows the famous nugget in all its glory. In fact, the original nugget was so large that it had to be broken on an anvil because it was too big to fit on a bank’s scales! When the weigh-in was completed, the nugget was estimated at being worth £10,000 – the equivalent of nearly $4 million today in Australian currency.

To make this coin even more remarkable, the talented artisans at the Perth Mint selectively plated it in gleaming 24-karat gold. The gold shines on the coin’s design as it covered the mint’s depiction of the famous gold nugget depicted on the coin! It’s gilded Uncirculated condition is as sharp and crisp as the day it left the mint and it will come with its original government packaging.

Just 5,000 of these beautiful legal-tender coins will ever be released – a number much too low for the hordes of collectors and silver stackers who would like to stumble upon this superb coin and its tribute to the original jaw-dropping nugget. Add this coin to your cart today – no digging required!

Discover the thrill of silver and gold with the 2019 Australia One-Ounce Silver Welcome Stranger Gold-Gilded Nugget. Quantities are limited so order yours now!