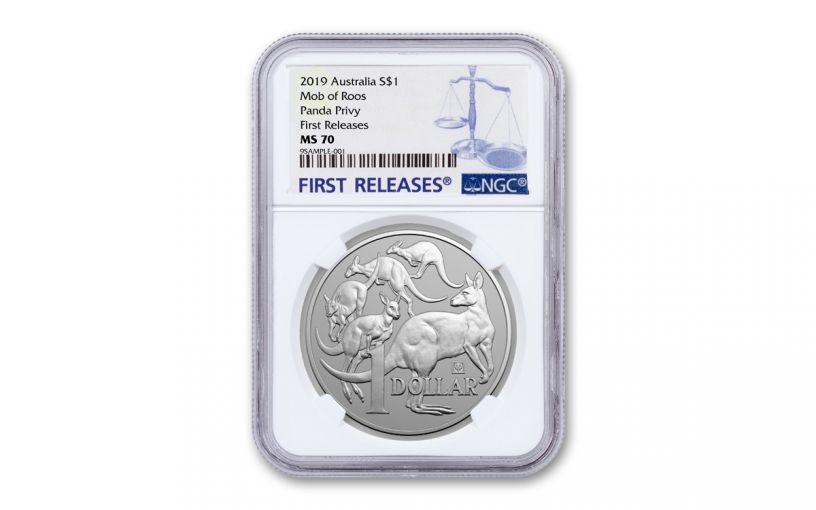 Availability: Out of Stock
This item is currently Out of Stock. Please sign up to be notified if this product becomes available.
Item #
356723
Add to Wish List Add to Wish List Wishlist is for registered customers. Please login or create an account to continue. Add to Compare

The long-legged, big-footed kangaroo is one of the most recognizable animals in the world – and perhaps the most famous critter ever to call Australia home. But now, thanks to the Royal Australian Mint, it’s added China’s capital city to its list of habitats thanks to its appearance at the Beijing Coin Show that was held November 15-17, 2019.

Actually, there were 5,000 kangaroos in attendance at China’s National Convention Center in Beijing – all in the form of spectacular silver coins struck by the world-renowned Royal Australian Mint exclusively for the show. Each coin was minted in one full ounce of highly pure 99.9% fine silver and features Stuart Devlin’s famous “Mob of Roos” design that depicts five of the adorable marsupials hopping around the face of the coin. What makes this coin extra special – and instantly distinguishes it as having been released at the 2019 Beijing Show– is the addition of a unique privy mark that can be seen just below the largest of the five kangaroos.

The special privy mark is a tiny rendition of a Panda Bear, a symbol of friendship and peace in China as well as being the star of the nation’s immensely popular Panda coin series that debuted in 1982. Pandas are often compared to the balance of yin and yang due to their black and white fur, and in recent years, the Panda has replaced the dragon as an emblem of China. The Chinese government is working to preserve these endangered animals that are native to the country’s central mountain ranges where only a few thousand live in the wild.

Your 2019 Australia One-Ounce Silver Beijing Show Kangaroo has been graded by the Numismatic Guaranty Corporation (NGC) as being in flawless Mint State-70 (MS70) condition, a distinction that means your perfectly-graded coin will have ZERO imperfections – showing all features and fields exactly as the engraver and mint intended. In addition, NGC has certified that your Silver Beijing Show Kangaroo is a First Releases (FR) coin, a designation that means your Silver Kangaroo was received by NGC or an NGC-approved depository within the first 30 days of its release.

With a maximum worldwide mintage of just 5,000 coins, you can bet these special 2019 Australia One-Ounce Silver Beijing Show Kangaroos will not last for long. Pocket one for your collection today!

Make sure one of these special privy-marked Beijing Show Kangaroos jump into your collection. Click one to your cart right now before they’re all gone!