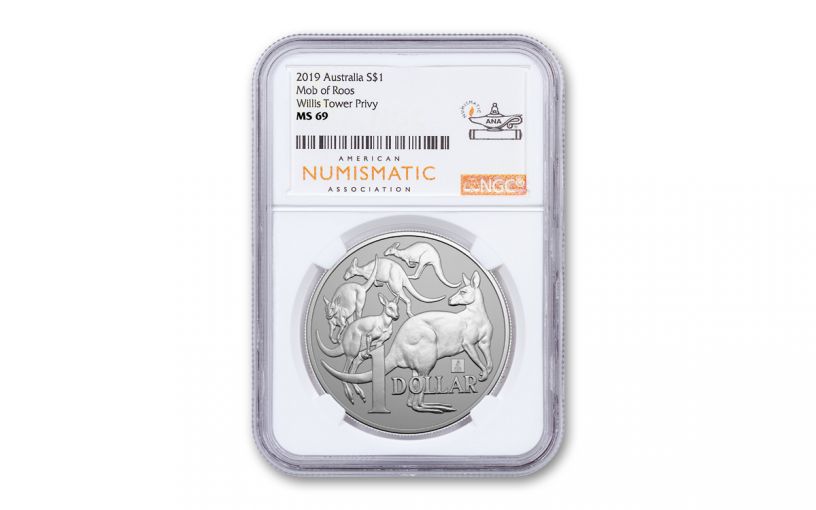 Availability: Out of Stock
This item is currently Out of Stock. Please sign up to be notified if this product becomes available.
Item #
354916
Add to Wish List Add to Wish List Wishlist is for registered customers. Please login or create an account to continue. Add to Compare

Actually, there were 5,000 kangaroos in Chicago – all in the form of spectacular silver coins struck by the world-renowned Royal Australian Mint exclusively for the ANA show. Each coin was minted in one full ounce of highly pure 99.9% fine silver and features Stuart Devlin’s famous “Mob of Roos” design that depicts five of the adorable marsupials hopping around the face of the coin. What makes this coin extra special – and instantly distinguishes it as having been released at the 2019 ANA Show in Chicago – is the addition of a unique privy mark that can be seen just below the largest of the five kangaroos.

In addition, your 2019 Australia One-Ounce Silver ANA Show Kangaroo has been graded by the Numismatic Guaranty Corporation (NGC) as being in near-perfect Mint State-69 (MS69) condition, a distinction that means your almost-flawless coin will showcase an impressive full strike and indistinguishable imperfections – well above and beyond the quality of the vast majority of coins in the series. And, with a maximum worldwide mintage of just 5,000 coins, you can bet these special 2019 Australia One-Ounce Silver ANA Show Kangaroos will not last for long. Pocket one for your collection today!