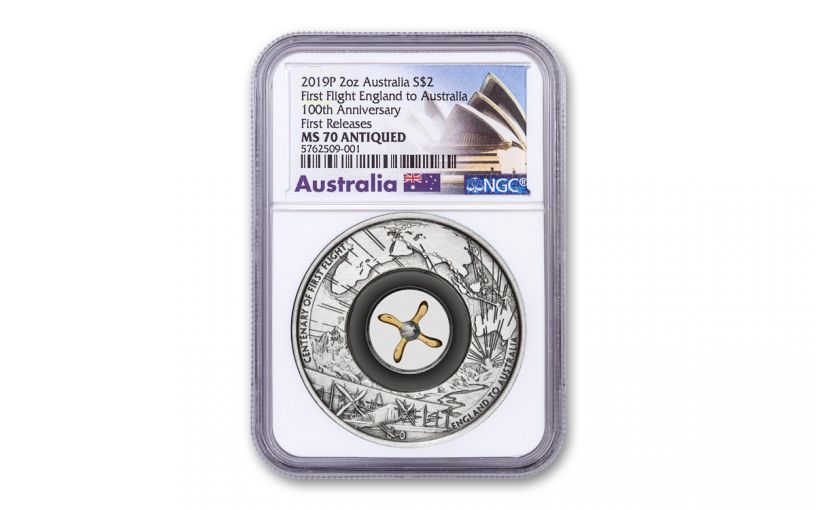 Availability: In Stock
This item will ship within 2 business days.
Item #
353729
CC Payments as low as
$124.50 / month
Add to Wish List Add to Wish List Wishlist is for registered customers. Please login or create an account to continue. Add to Compare

Only a little more than a decade after the Wright Brothers made the world’s first powered flight, thousands of aircraft buzzed about the skies over Europe engaged in deadly dogfights. When World War I ended the public was soon captivated by the advances made by the new-fangled flying machines, making it the perfect time for aviators to spread their wings. One of the countries leading the way was Australia, where the government announced in early 1919 that it would award £10,000 – a prize worth more than $175,000 today – for the first flight from Great Britain to Australia. The rules stated that trip could take no more than 30 days, consist of only Australian aircrews and land before the clock struck midnight on December 31, 1920.

On the 100th anniversary of the first successful England-to-Australia flight, the world-famous Perth Mint has released an incredible coin struck in two full ounces of 99.99% pure silver that features an actual gold-plated propeller inset. This legal-tender $2 coin also features a unique antiqued finish to give its surface the look and feel of an aged artifact. The coin’s reverse depicts a map with the flight’s route marked above an illustration of a mountainous landscape. In the foreground is a representation of the Vickers aircraft that finished first and claimed the prize money.

Your 2019 Australia First England-to-Australia Flight Coin has been graded by the Numismatic Guaranty Corporation (NGC) as being in perfect Mint State-70 (MS70) condition, a distinction that means your perfectly-graded coin will have ZERO imperfections – showing all features and fields exactly as the engraver and mint intended. In addition, NGC has certified that this is a First Releases (FR) coin, a designation that means it was received by NGC or an NGC-approved depository within the first 30 days of its release.

Six teams started the race, but the one that claimed the prize was a four-man team consisting of Captain Ross Smith, his brother Lieutenant Keith Smith as co-pilot, and Sergeants James Bennett & Wally Shiers as mechanics. Their modified WWI Vickers “Vimy” bi-plane bomber made the 11,123-mile flight in 28 days, reaching a landing strip in Darwin, Australia on December 10, 1919. Before leaving on November 12, 1919, the crew painted the wings and fuselage of their plane with the registered letterings, G.E.A.O.U. Ross Smith quipped that these five letters really stood for “God ‘Elp All Of Us.” With no radio and only a handheld compass to guide them, they needed all the help they could get!

In 1919, aviation was in its infancy. Cockpits were open and instruments were rudimentary. There were no navigational aids and pilots often relied on school atlases or roadmaps as their guides. Getting lost was commonplace and landing in a field to ask directions was not unusual. Of the other five entries who attempted the feat, two crashed killing all their crew. A third crashed near a mental hospital in Crete with no injuries. A fourth was delayed after being arrested in Yugoslavia as suspected Bolsheviks. After resuming the race, it crash-landed in Bali where its crew was able to walk away with only slight injuries. One other entry DID finish the race, but it took them 206 days to complete the journey. Despite landing nearly 8 months after the winners and not finishing within the time limit, they claimed a £1,000 prize for finishing second.

Just 2,000 of these amazing coins will ever be struck and each comes in a classic display case with a clear lid and accompanied by a numbered Certificate of Authenticity. Let this coin take flight in your collection, add it to your cart today!