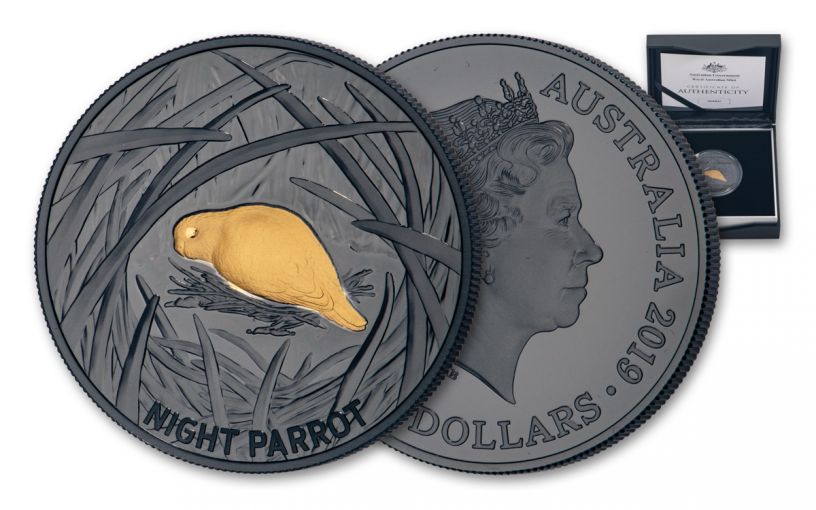 Availability: Out of Stock
This item is currently Out of Stock. Please sign up to be notified if this product becomes available.
Item #
349589
Add to Wish List Add to Wish List Wishlist is for registered customers. Please login or create an account to continue. Add to Compare
Product Description

The discovery of a dead bird isn’t usually a cause for celebration, but it was in 1990 when the tiny body of an Australian Night Parrot was found. With no confirmed sightings of this elusive bird from 1912 to 1979, most ornithologists believed this little parakeet to be extinct. Bits and pieces of evidence that the bird still lived have once again surfaced in recent years and today it is believed the bird’s total population numbers somewhere between 50 and 250. Thanks to a new coin from the Royal Australian Mint, the Night Parrot can be discovered again as the third and final coin in the Echoes of Australia series!

Struck in a full ounce of highly pure 99.9% fine silver, the coin features the little bird at the back of its tunneled nest of twigs. This colorful parrot exists in the wastelands of coastal southern Australia and western Tasmania and takes to the air only when startled or in search of water. A nocturnal creature, it has also been nicknamed the “Midnight Cockatoo” by locals for the sounds it makes during the evening that have been described as a croak. With green and gold feathers that blend with its surroundings, the Night Parrot has adapted to life in the Australian Outback and remains one of the world’s most aloof and mysterious birds.

This legal-tender $5 coin paints a haunting picture of this unique creature with a theme that includes the addition of black nickel plating over the entire coin and selective gold plating over the Night Parrot design. The entire presentation is even more fantastic due to its proof condition. Its hand-selected planchets, polished dies and multiple strikes have produced beautifully evocative frosted details rising over dreamy mirror-like fields.

Don’t wait long to add this exotic creature to your covey of coins because the Royal Australian Mint has set the maximum worldwide release at just 5,000. Each will come in its original government packaging from the mint, including a presentation case with a numbered Certificate of Authenticity.

The 2019 Night Parrot One-Ounce Silver Proof is sure to attract the attention of collectors around the world. Add one of these fantastic coins to your collection now before our supply becomes extinct!