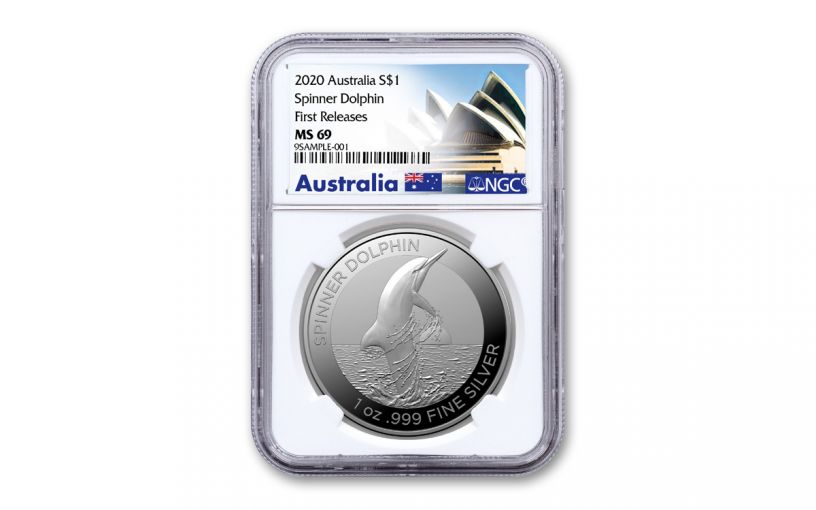 Availability: In Stock
This item will ship within 2 business days.
Item #
357910
Review this product
Add to Wish List Add to Wish List Wishlist is for registered customers. Please login or create an account to continue. Add to Compare
Product Description

Take Australia’s Latest Entry In Its Dolphin Bullion Series Out For A Spin!

In 2019, the prestigious Royal Australian Mint introduced a new bullion series that sure made a splash with collectors around the world! The Dolphin Bullion Series debuted to collector acclaim and now the second year of the series is here featuring an engaging image of a Spinner dolphin, one of the most acrobatic animals on the planet!

Struck in a full ounce of highly pure 99.9% silver, this legal-tender coin features a Spinner dolphin rising from the surface of its tropical waters ready to live up to its moniker with a series of mid-air twists and twirls that are simply breathtaking. It’s a fascinating design that’s sure to capture the heart of anyone who has ever been to a zoo or aquarium and had a seat at a dolphin show. At 40 mm in diameter, this large coin is big enough to accommodate the athletic prowess of the Spinner dolphin, an aquatic marvel that can leap into the air and make as many as seven complete spins before diving back into the ocean!

Now you can add Australia’s 2020 dolphin bullion coin to your collection. Plus, each 2020 Australia One-Ounce Silver Spinner Dolphin Coin available in this offer has been graded by the Numismatic Guaranty Corporation (NGC) as being in near-perfect Mint State-69 (MS69) condition, a distinction that means your almost-flawless coin will showcase an impressive full strike and indistinguishable imperfections – well above and beyond the quality of the vast majority of coins in the series. In addition, NGC has certified that these One-Ounce Silver Spinner Dolphins are First Releases (FR) coins, a designation that means they were received by NGC or an NGC-approved depository within the first 30 days of their release.

With a mintage of just 25,000 one-ounce silver coins, you can bet coin collectors, dolphin fans and silver stackers will all be vying to get a share of this release. Don’t wait, add one of these coins to your collection – or make a real splash and add several! Click a dolphin to your cart today!