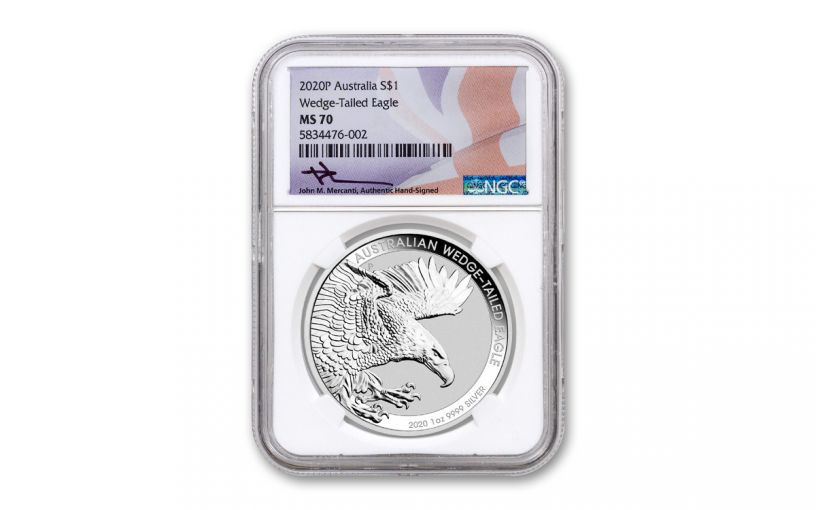 Availability: In Stock
This item will ship within 2 business days.
Item #
360029
Add to Wish List Add to Wish List Wishlist is for registered customers. Please login or create an account to continue. Add to Compare

Look Out! The New 2020 Wedge-Tailed Eagle is Ready to Dive

In 2014, John Mercanti became the first former Chief Engraver from the United States Mint to work with a foreign mint when he helped create the popular Wedge-Tailed Eagle series with Australia’s Perth Mint. Since then, the series has featured multiple new designs by Mercanti, and 2020 is no different.

This year’s one-year-only reverse depicts a close-up of Australia’s largest bird of prey as it prepares to dive for its next meal. Struck in a full ounce of highly pure 99.99% fine silver, this modern-day masterpiece represents the prefect blend of design, precious metal and collector appeal. Plus, each coin available in this offer has been graded by the Numismatic Guaranty Corporation (NGC) as being in flawless Mint State-70 (MS70) condition, a distinction that means your perfectly-graded coin will have ZERO imperfections – showing all features and fields exactly as the engraver and mint intended.

In addition, your coin will be sonically sealed in an acrylic holder and encapsulated with an exclusive Australian flag label that was personally signed by the legendary John M. Mercanti! A giant in the numismatic world, Mercanti has produced more coin and medal designs than any person in U.S. Mint history.

The maximum worldwide mintage for this spectacular release has been set at just 50,000 – and just like the 2018 & 2019 mintages, it, too, is completely sold out at the mint! And, unless you can afford to travel all the way to Australia, the only place to secure one of these coins, is through GovMint and its marketing partners since we have the worldwide distribution rights outside of Australia!

There’s still time to get on board the international phenomenon that is Australia’s Wedge-Tailed Eagle program. Click one – or several – of these pure silver coins to your collection and soar with the Eagle from Down Under!

Australia’s 2020 Wedge-Tailed Eagle is ready to dive to your collection. Make sure you don’t miss out – reserve yours now!