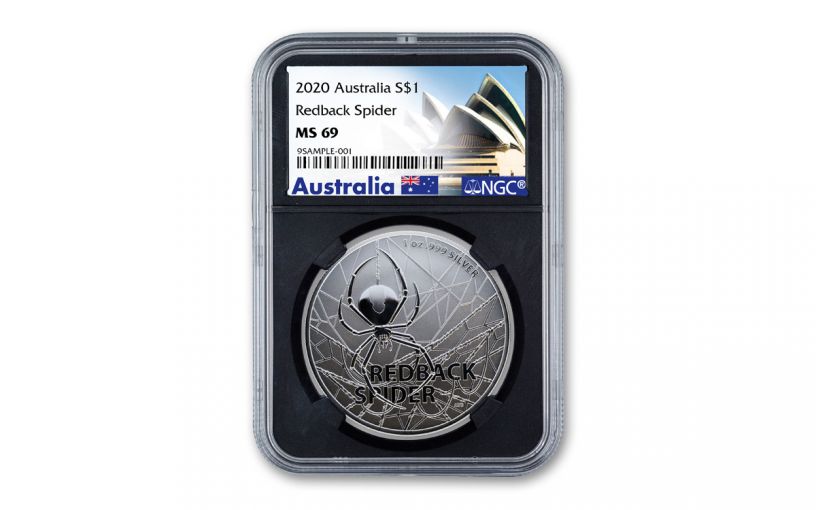 Availability: Out of Stock
This item is currently Out of Stock. Please sign up to be notified if this product becomes available.
Item #
356323
Add to Wish List Add to Wish List Wishlist is for registered customers. Please login or create an account to continue. Add to Compare
Product Description

A Spider You’d be Happy to Have in Your Home

Here’s a coin that’s taking our WEB-site by storm – and is it any wonder? It is, after all, a spider coin! Struck by the world-renowned Royal Australian Mint, this coin features a creepy image of the infamous Redback Spider, but it’s one spider you’ll actually be happy to have in your home!

Minted in a full ounce of highly pure 99.9% fine silver, this legal-tender $1 coin shows the dangerous little arachnid crawling across her web in preparation for her next vict… er, “guest” to visit her parlor. Known as the “Australian Black Widow,” the Redback Spider is one of the world’s few spider species that are actually dangerous. In fact, this species’ proclivity for spinning webs in man-made structures virtually insures it will come in contact with humans – contact that has resulted in many serious spider bites in Australia. The Redback Spider is reportedly responsible for more than 250 cases each year that have required a dose of antivenom. Symptoms of a bite include nausea, vomiting, headache, malaise, lethargy and, in rare cases, death.

The coin also depicts the Redback Spider’s hourglass shapes and its distinctive marking. Female Redbacks have a red-orange dorsal stripe, males have pale marks. The design shows the spider surrounded by her webbing and name in big, bold letters along with the coin’s silver purity. Brought to life as a stunning Uncirculated release, your coin has been further graded by the Numismatic Guaranty Corporation (NGC) as being in near-perfect Mint State-69 (MS69) condition, a distinction that means your almost-flawless coin will showcase an impressive full strike and indistinguishable imperfections – well above and beyond the quality of the vast majority of coins in the series. It will also come sonically sealed in an acrylic holder with a special black display core and an exclusive Sydney Opera House label.

The maximum worldwide limited edition for this bullion coin has been set at just 25,000, however, so don’t get trapped in a web of indecision – order your coin today!

The highly venomous, distinctive looking Redback Spider has finally been tamed on this one-ounce silver coin. Add it to your collection and you’ll be able to spin an incredible tale about “The Black Widow from Down Under!”