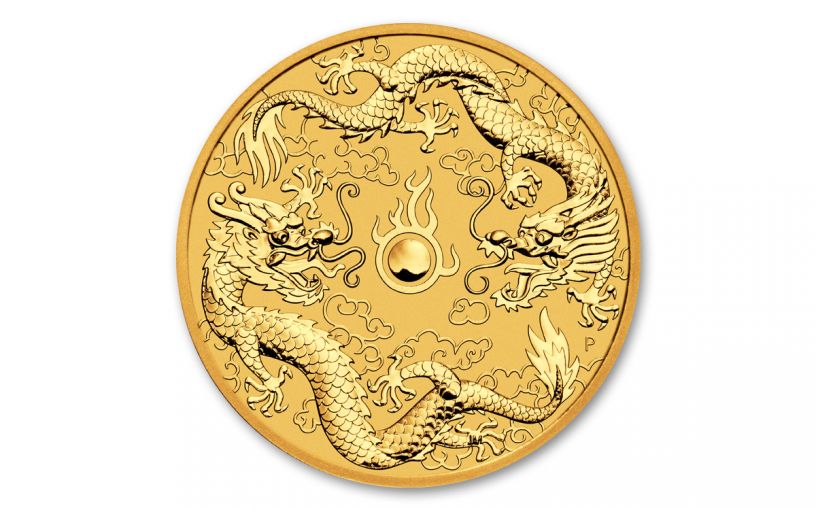 Availability: Out of Stock
This item is currently Out of Stock. Please sign up to be notified if this product becomes available.
Item #
357383
Add to Wish List Add to Wish List Wishlist is for registered customers. Please login or create an account to continue. Add to Compare

Unlike the malevolent Western dragons that used to roam Europe kidnapping fair maidens, battling brave knights, and laying waste to entire villages; the Chinese or Eastern dragon was – and still is – a sign of wealth and good fortune. The emperors of China believed they were descendants of a dragon and regarded the creature as a symbol of power and royal dignity. Supremely intelligent, Chinese dragons are always in the pursuit of knowledge as represented by a flaming pearl of wisdom.

Thanks to Australia’s world-renowned Perth Mint, you, too, can hold the flaming pearl of wisdom in your hand along with a pair of dragons with this intricately designed coin stuck in a full ounce of highly pure 99.99% gold. The two dragons curve around the rim of the coin in a perpetual quest for the knowledge brought forth by the pearl. The detail is so exquisite that you can see every scale on their long slender bodies.

Besides being the bearer of good news, Chinese dragons differ from their Western counterparts in other ways. According to Chinese folklore, a dragon is the combination of nine animals. It has the eyes of a lobster, horns of deer, mouth of an ox, nose of a canine, whiskers of catfish, mane of a lion, tail of a snake, scales of a fish and claws of an eagle. And even though they don’t have wings like the fire-breathing terrors that blazed a path of destruction across medieval Europe, Chinese dragons can still fly across the sky where they use their mysterious powers to control the weather, wind and rain.

This engaging $100 legal-tender coin is limited to a maximum worldwide edition of just 5,000 Brilliant Uncirculated (BU) coins. With its dragon theme, you can bet collectors in the Asian markets will try to grab as many of these coins as they can. You’ll have not only those folks to battle for these coins because the pure gold is sure to attract the attention of gold stackers everywhere. Don’t get left high and dry; secure one – or several—of these magnificent 2020 Australia One-Ounce Gold Double Dragon Coins today!

Fans of Australia’s silver Dragon coins are sure to love this latest release from the Perth Mint. Double your luck with the 2020 Australia One-Ounce Gold Double Dragon. Click one to your cart today!