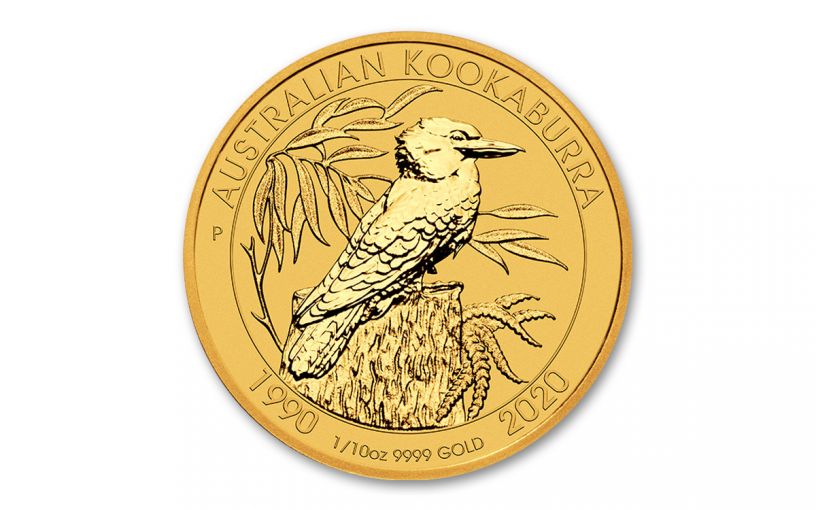 Availability: Out of Stock
This item is currently Out of Stock. Please sign up to be notified if this product becomes available.
Item #
358030
Add to Wish List Add to Wish List Wishlist is for registered customers. Please login or create an account to continue. Add to Compare

Australia’s famous Silver Kookaburra Series has been a mainstay of the Perth Mint since its debut in 1990. Since then, the coins have captivated the imaginations of collectors with their new one-year-only design every year. To celebrate the coin’s landmark 30th anniversary in 2020, the Perth Mint is striking a special one-of-a-kind coin – its first-ever Gold Kookaburra bullion coin!

Minted in a tenth ounce of highly pure 99.99% gold, this legal-tender $15 coin pays homage to the very first Silver Kookaburra by using a representation of Stuart Devlin’s design from the 1990 coin that shows a kookaburra perched atop a tree stump surrounded by native foliage. The design is augmented with an inscription that reads AUSTRALIAN KOOKABURRA along with the dual dates of 1990 and 2020. The coin’s weight and purity are also engraved along with the Perth Mint’s famous “P” mint mark.

Each gleaming gold coin available in this offer comes in original Gem Brilliant Uncirculated (BU) condition, as fresh and sharp as the day it left the mint. These coins are sure to be incredibly popular among both collectors and gold bugs alike. With an announced maximum edition of just 15,000, however, these coins will not last long — especially since they have been announced as being sold out at the mint. Take advantage of this opportunity now while you still can and add the first-ever Gold Kookaburra bullion coin to your collection today!

To celebrate the 30th anniversary of its Silver Kookaburra series, Australia is releasing its first-ever Gold Kookaburra bullion coin. Reserve yours now by clicking one to your cart!