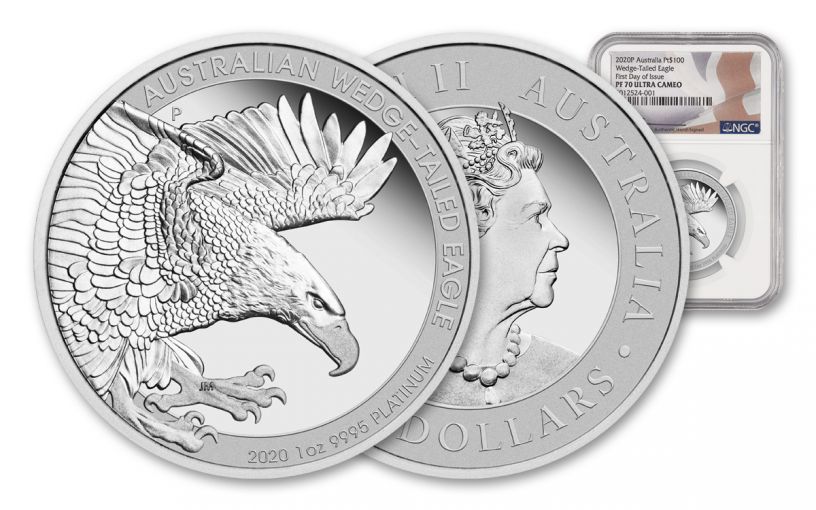 Availability: Call-In Only
This item is only available on a Call-In basis. Please call 1-800-510-6468 to speak to a representative.
Item #
362796
Add to Wish List Add to Wish List Wishlist is for registered customers. Please login or create an account to continue. Add to Compare

The Mercanti-Perth Mint partnership continues in 2020 with the release of a new one-year-only design that is sure to have particular appeal to collectors. For this year’s design, Mercanti, the 12th Chief Engraver at the U.S. Mint, has given us a close-up of Australia’s largest bird of prey as it prepares to dive for its next meal. Struck in a full ounce of highly-pure 99.99% platinum, this   coin features a magnificent design that celebrates Australia's largest bird of prey — a design that could have originated only through the brilliant talents of John Mercanti!

Your 2020 Wedge-Tailed Eagle One-Ounce Platinum Proof has been graded by the Numismatic Guaranty Corporation (NGC) as being in flawless Proof-70 Ultra Cameo (PF70UC) condition, a distinction that means your perfectly-graded proof will have ZERO imperfections – showing all features and fields exactly as the engraver and mint intended! In addition, NGC has certified that your Wedge-Tailed Eagle Proof is a First Day of Issue (FDI) coin, meaning it was received by NGC or an NGC-approved depository by the release date or on the business day within 24 hours of the official release date.

As a final added touch, each coin available in this offer will come sonically sealed in an acrylic holder and encapsulated with a label displaying the Australian Flag and personally signed by John Mercanti! A giant in the numismatic world, Mercanti has produced more coin and medal designs than any person in U.S. Mint history.

With a mintage of only 250, you will need act fast to capture your 2020 Wedge-Tailed Eagle One-Ounce Platinum Proof. Since taking flight, this series has been immensely popular. In fact, it's already been announced as being sold out at the mint, so order yours now because these Eagles may not be around for long. Click one to your cart today!

NEW ONE-YEAR-ONLY DESIGN – The 2020 Australia Wedge-Tailed Eagle’s new one-year-only design is the creation of former United States Chief Engraver John Mercanti and depicts a close-up of Australia’s largest bird of prey as it prepares to dive for its next meal. The coin’s obverse features a portrait of Queen Elizabeth II.

STRUCK IN HIGHLY-PURE PLATINUM – Each 2020 Wedge-Tailed Eagle coin was struck from one ounce of highly-pure 99.99% platinum at the Perth Mint, which is represented by a “P” mint mark above the eagle on the reverse. The Perth Mint is revered by collectors throughout the world for the consistent, outstanding quality of its coins.

AUSTRALIA LEGAL TENDER – Each 2020 Platinum Wedge-Tailed Eagle is one hundred dollars legal tender in Australia and measures 32.6 mm in diameter.

GRADED IN PERFECT PROOF CONDITION – Your 2020 Wedge-Tailed Eagle One-Ounce Platinum Proof has been graded by the Numismatic Guaranty Corporation (NGC) as being in perfect Proof-70 Ultra Cameo (PF70UC) condition!

KEY FIRST DAY IF ISSUE CERTIFICATION – NGC has certified that your One-Ounce Platinum Wedge-Tailed Eagle Proof is a First Day of Issue (FDI) coin, independent authentication that it was released by the mint during the premier day of the series’ issue.

SIGNED BY JOHN MERCANTI – Your coin will be sonically sealed in an acrylic holder and encapsulated with a label personally signed by the legendary John M. Mercanti, the U.S. Mint’s 12th Chief Engraver.

A LIMITED MINTAGE – Although this series has become a favorite among collectors, this mintage will consist of just 250 One-ounce platinum proofs. APKLus, it's already been anounced as being sold out at the mint.

The release of Australia’s 2020 Wedge-Tailed Eagle One-Ounce Platinum Proof is a major numismatic event, one that collectors, platinum stackers and fans of John Mercanti’s work will all be vying to secure. Don’t miss your chance to acquire this fabulous coin. Order yours now!